a few weeks ago my incredible kindergarten co-teacher and i decided to take a step back with writing workshop. although we were excited about what the kids were producing, they weren't really doing a great job sitting and listening to one anothers' stories, which meant they were missing out on the actual learning portion. while it was awesome to see what they put down on paper we felt like we weren't really doing any teaching. some of the kids, we realized, needed a much better concept of what a story is. many of the children in our class did not have any sort of school experience before walking in our doors in july. their parents work long hours at multiple jobs and so we're willing to guess they aren't hearing many stories read aloud at home either.
so, in the terms used my special ed grad class, my co-teacher and i sat down and looked at the required skills kids need to have in order to be ready to learn about oral story telling, and we decided it was time to teach those skills first.
the first skill they needed was the ability to sit on the carpet for an extended period of time while listening to someone else speak. and what prerequisite skill is needed for a student sitting on the carpet for an extended period of time? the understanding that stories are fun and that if you sit quietly you get to hear a fun story. we needed to first teach them the concept of story in order to give them the motivation to sit quietly and listen to more stories, so that (one day) we could teach them more about stories. we hated taking a break from the oral story telling, especially when we had kids who were so into it, but we wanted to back-track to make sure the rest of the year would be productive for all of the children.
so, we began by shorting time on the carpet to literally no more than 5 minutes. it was really impressive. my co-teacher had loads of activities stacked up so we could have kids on the carpet, then up at their seats, then back at the carpet again. quick transitions with lots of activities so we could slowly build up their stamina. in those 5 minutes on the carpet we read fun big books like mrs. wishy washy, got up, did an activity, read the story again, did another activity, read the story again while doing hand motions. we could tell the kids were buying the fun story element of it all when we heard them repeating lines from the stories at their tables.
then my awesome co-teacher started in on a mini-unit of the three billy goats gruff. the kids read the big book, and re-read it until most knew it. (during this time we were slowly increasing the time on the carpet). then she added puppets. today she divided them into groups and each group had a noise to make for their character in the story. i just about died laughing watching one girl's face as she roared as the troll. she is one we initially placed in our writing group that needed to learn about the concept of story.
today we had them draw pictures of their favorite part from the story and we placed them on a chart "Beginning, Middle, End". i was a bit worried about whether or not they'd be able to classify their picture in one of the categories, but they all did it with very little prompting. this (hopefully) will all tie into our oral story telling lessons on how we tell stories across pages- stories with a beginning, middle, and end.
so while we're really excited about how we've increased their story listening stamina, and their understanding of how stories work, we're also noticing that they are bursting at the seams to tell stories. (well, some of them at least). so we set up a board in the room where they can ask to move their name to the "i have a story to tell" side. then when i have a chance (like during their snack time, or during one of their table activities) i pull children to tell their stories across the pages. working with two-three children at a time is rewarding in itself, and it gives some of our needier kiddos the love they are dying for, while completing academic work. and, almost more importantly, letting us see into their lives bit by bit so we can understand where they are coming from.
it's been interesting to go back and see what we needed to teach for the children to be successful. part of me worried we were betraying already ready and the oral story telling we were so excited about. isn't the premise of katie wood ray's book that children are already ready and already have the skills in place to be authors? then again, when they couldn't sit quietly and listen to a story we couldn't use mentor texts, and we couldn't sit quietly and listen to a story because we didn't speak english and didn't appreciate that stories can be engaging and fun. so instead my co-teacher and i became story advocates, selling a love of reading to the masses. 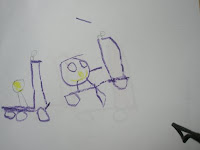 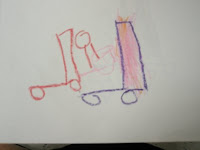 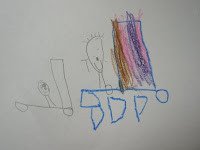 this little boy begged to share the story of how he got a boo-boo over the weekend. after shhhing him many times on the rug i finally waited for a moment when he was on-task and suggested that he tell his exciting story with me, on paper.
it "reads": once upon a time m. was on his scooter. my scooter is much faster than my sister's. she's really slow. we were going to the park. i put my leg down on the ground to go faster. then (next page) i fell off my scooter. i cried (these are the tears). my sister didn't stop and she ran into me. then i got back on my scooter and went to the playground. i hit more rocks but i didn't fall. my sister was slow.
this was his work a few weeks ago: it was a one page story about a mosquito that made his whole family bleed. it took a very long conference to pull the story out and get him to add any sort of detail (note the red blood drawn elaborately merely to please me with his "detail"). on the story above he added detail spontaneously. 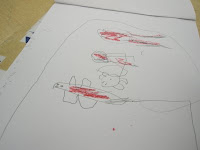 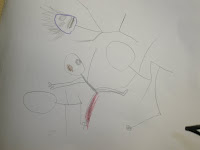 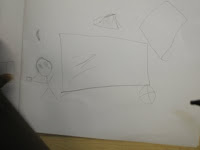 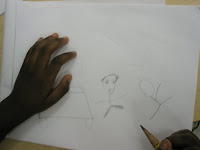 this little one saw a car accident this week. here is his family in the car (picture 1) going to his cousin's house. the next picture is him outside his house listening to his i-pod when the accident happened. he described the accident in detail, and then the third page is his dad coming out to say, "who did this?" and his mom (who is now listening to the i-pod) says, "not me!" he added tons of detail here, which was exciting because that was one of our goals- to get them to add more details to their pictures. adding the details took no prompting!
This is his writing workshop work a couple weeks ago. It is a picture of him and spiderman. 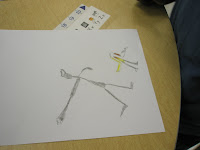 so, i think our reflections, our long hours after school of going through our exact wording to keep our lessons so short, our intense planning for small 5 minutes paid off. we're slowly getting there. hooray for victories!

Posted by organized chaos at 3:41 PM

Email ThisBlogThis!Share to TwitterShare to FacebookShare to Pinterest
Labels: Already Ready, kindergarten...wow, reading-the most important thing in the world

I've been reading your blog and really enjoying it. I teach kindergarten to an all ELL class. We are fighting these same issues right now. I am going to try some of your ideas to see if we can't be better story tellers.