we survived our first kindergarten field trip. there were times i thought they'd have to leave me there at the apple orchard, but in the end we all managed to make it back to the bus, alive, with minimal damage.
as we boarded the bus this morning i noticed one little girl practically doing back-flips. she is usually too-cool-for-school and this was honestly the first time i'd seen genuine childhood excitement in her eyes. "This is SO cool!" she kept squealing, her body shaking with excitement. turns out she'd never ridden a bus before. she kept staring out the window exclaiming, "WOW! look! there's a house!"

the little boys in the class were equally excited. despite having been on a bus before they'd never been on a bus in rush hour traffic. i was a little worried when we were passed by two tractor trailers~ one on each side of the bus, that the little ones would wet their pants from the amazement of it all. there were lots of little hand and nose marks left on the windows. we even got to drive past a construction zone! and then we were passed by a fire truck. it doesn't get better than that.

because of how far away the apple orchard was and our wonky schedule we had to eat the minute we got off the bus, and even then we really only had 15 minutes to shove food down the children's throats. as we got them to throw away their trash and line up to begin the presentations they all started saying, "that was the best field trip ever!" "are we going home now?" the bus ride and the picnic lunch alone would have been enough excitement for them apparently. so why did we pay $8 a person?!

the actual presentation at the apple orchard was fabulous and the kids got a lot out of it. however, i think the apple-orchard farmers may have been relieved to see us leave. my group began with some apple relay races, which would have been fabulous if our kiddos had any clue what a relay race was. our guide gave fairly good directions (just left out the whole visual modeling part) and then said, "Ok, one, two, three, go!" and all of the kids began sprinting toward the apple-baskets, except one who was determined to throw her apple. receptive language not being our strongest skill, they all missed the point about what a relay race is and so 'go' meant go as fast as you can and push down those kids lined up in front of you.


i was useless getting them back in line because i was laughing so hard. the kids looked confused about why we were yelling at them, but eventually they got the idea that they had to wait. now, if receptive language is not our #1 strength, waiting our turn is... let's just call it what it is, a great big weakness. so... the kiddos would be standing there so proudly, waiting in line, waiting, waiting, waiting, and then suddenly would burst from their spot in line and run circles around the group. waiting is hard. 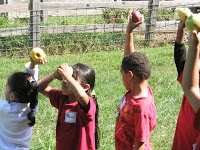 "if you're happy hold up your apple!"


overall it was a fabulous field trip and the best part was it didn't require much from us teachers other than running crowd control. the kids came home happy, we came home exhausted, and we'll all sleep well tonight.
Posted by organized chaos at 1:52 PM

Email ThisBlogThis!Share to TwitterShare to FacebookShare to Pinterest
Labels: kindergarten...wow