A few weeks ago I excitedly took Little Lipstick to the library and slid the Elephant and Piggie books off the shelf. I couldn't wait to dive into them with her. How many times have I read them to a giggling kindergarten class? How many children have I read them to who ended up clutching them to their bodies as though they were cuddling their favorite teddy bear? I couldn't wait to share that same love of a book with my own little one.
We checked the books out, brought them home and cuddled together on the floor to read. I broke out my very best piggy and elephant voices. I did the theatrics. I was animated and over the top just like I usually am when I read aloud in the classroom.
Apparently that is too much for a two year old, or at least for my two year old.
Perhaps I was too animated. Too over the top. Maybe I was a bit too dramatic as I sighed a dramatic elephant sigh to show his worry over Piggie. Maybe it was too unsettling to see her normally calm mommy being so dramatic. Maybe I am a horrible actress. Whatever it was, I ruined Elephant and Piggie for my own daughter.
I want you to read that again but with the mental image of Gerald, the Elephant sighing and then exploding with worry.
I RUINED ELEPHANT AND PIGGIE FOR MY DAUGHTER.
She won't let me read the books anymore. "No Mama" she says, pushing the book away every time I try.
How can I call myself a teacher? A lover of children's literature?
What if the same thing happens when it is time to read Harry Potter?  What if *gasp* she doesn't share the same love of certain books with me?
*fall into dramatic heap* 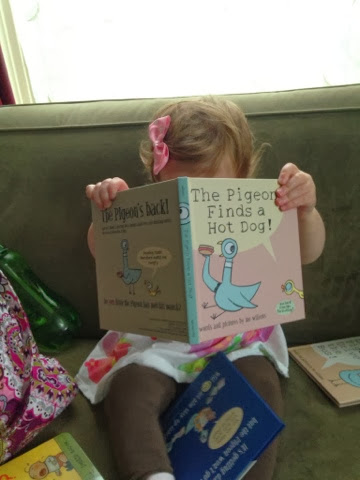 Posted by organized chaos at 6:52 AM 3 comments:

"He said WHAT?" Third grade reactions to The Paper Bag Princess

Today I had the privilege of reading Robert Munch's The Paper Bag Princess to a small group of third graders. I've ready it for years to first graders and kindergartners, and for the past year have been reading it to my daughter. I've never read it to older students before, especially not ones who were hearing it for the first time. Since I have the book memorized (not an exageration, I have recited it on car trips to a very fussy toddler) I wasn't really even thinking much about it. I'd chosen it so we could talk about how the main character is strong and stands up for herself. (This is a social skills lunch group). I wasn't prepared for the deeper level thinking that third graders would bring to the text, or their response to a fairy tale like story that didn't fit in with their schema.

If you've never read it before* it is about a princess who is set to marry a prince. However, a dragon interferes with these plans when he burns down her castle and carries off the prince.

Right here the third graders gasped. This is NOT what was suppose to happen they pointed out. The dragon was suppose to take the princess. In fact, when we spent time predicting what would happen before we even started reading that was exactly what they predicted- the dragon would take the princess, the prince would rescue her by physically fighting the dragon, and then the prince and princess would get married. Just like every other fairy tale.

Maybe, one boy pointed out, the dragon was so tired of kidnapping princesses and then having the prince come along and fight him that he figured if he stole a prince the princess wouldn't be able to fight back. In all the years I've taught this book I've never once thought about the dragon's motivation. Maybe I am starting to warm up to third grade.

We got past that first shock and read on, finding that Elizabeth (the princess) had to outwit the dragon instead of fighting him. Their eyes shown as they listened to what she did and they made their own plans on how they would trick the dragon. One boy made a long list of all the ways a dragon could hurt him and then all the ways he could neutralize those threats (my words, not his).

Then of course, we came to the climax. Elizabeth tricks the dragon, rescues Prince Ronald and then, *spoiler alert* Prince Ronald takes one look at her, lists all the things that are wrong with her (she is dirty, she smells, she is wearing a paper bag) and tells her to come back when she looks like a real princess.

"I don't understand" one girl said. "That's not what is supposed to happen. She RESCUED him." The girls sat and stared at me like I'd read the words on the page incorrectly. "Why doesn't he get it?"

They were all horrified by his lack of respect for the princess who just rescued him, but they were all surprised when we turned the page and Elizabeth and Ronald don't get married after all.

"Other stories end with a happy ending" one girl said, looking perplexed. That of course opened the door to discussing what a happy ending really is (well, it was happy for Elizabeth, but not Ronald one third grader pointed out).

It was definitely the most thought provoking discussions I've ever had about the book, but also the most enlightening lesson (for me). I've always read it to children who are young enough to naturally accept the story. Reading it to third graders who have a strong schema of what a story should look like changed the dynamics of the lesson completely. It no longer was about Elizabeth, but instead about what we expect from stories and why they are all the same. Why do all the stories end with happy endings, with the princess getting married and the prince rescuing her? It was fascinating to watch the group of students struggle with understanding an amusing and entertaining simple text simply because it challenged their own schema of how stories work.

*You should immediately run to the library and check it out. Or buy it on Kindle. It's available there too

Whew, it's been awhile. This year more than any other year in my teaching career I've been struggling with keeping a healthy work/life balance. I'm finding it hard to do anything that isn't work or taking care of my toddler (don't ask the last time I got my hair cut) which means I've also been having trouble finding time to blog. But I'm a happier, more reflective teacher when I blog so I need to start making it more of a priority again.

Since we left off we've returned from school after Thanksgiving break only to have two long, glorious snow days (in which I ended up being FAR more tired than I would have been if I'd worked. Keeping up with a toddler is rough, especially pregnant!)  We have one week left (3 days now) until Winter Break and I think we are all counting the hours. The kids have been off, everyone's stress level is up, and we're all about to implode. Every year it always seems that break comes right when we think we can't take it anymore.

I have lots to say about it all and hopefully I'll find the time to say it!
Posted by organized chaos at 5:37 PM No comments: