writing our own endings... 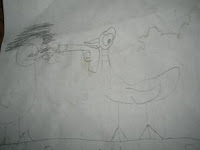 look carefully. yes, that is a pigeon holding a handgun to a duck's head and blowing his brains out. the words on the page said, "pigeon is handgun. boom."

this is another one that was on my fridge that had to be tossed in the move.

it was the beginning of last year and we had read the Mo Willems Pigeon books. (if you are not familiar with them you are missing out. although not necessarily 'good literature' kids LOVE them and reading them with a child is always an entertaining experience.)
one of my little friends, who has autism, drew this picture during writing workshop.
you see, in one of the books the pesky duck is following the pigeon around asking for his hotdog. so my friend with autism wrote an alternative ending to the story. one where instead of sharing the hot dog, (because really, who wants to do that?), the pigeon blows the duck's head off. perfectly reasonable really.
because he does have autism this isn't as violent or upsetting as one might think. we did show mom and the principal, but really we just needed to sit down with the student and nicely explain that we don't draw guns in school, and that using a gun to solve your problems isn't a good idea.
still, it may be one of my favorite pieces of art from first grade ever.
Posted by organized chaos at 4:50 PM

Email ThisBlogThis!Share to TwitterShare to FacebookShare to Pinterest
Labels: memorabilia