my husband and i bought a house and we're in the overwhelming process of trying to pack up and move. in going through old papers, deciding what can be thrown away and isn't worth moving yet again only to stay in a box. i keep coming across bits of papers and notes from kids that make me think, "how can I possibly throw that away?" but after 4 or 5 years, its time. i realized however that a picture will make it last forever on my computer, so that i no longer need to hold onto the original document. so be patient, i'll slowly be telling stories with my memorabilia pictures as i clean.

a few years ago i had a little boy with autism in my first grade class. he was only there a month before he moved, but in that month he made quite an impression. daily he and i would struggle over writing workshop. he wanted to just sit there, and i, well, wanted him to at least attempt to put words on a page. or a picture on a page. anything. it was the beginning of first grade, so a lot of the kiddos didn't know their letters or letter sounds. really, any attempt would make me happy.

one day we hit a break through. after our first writing conference of the day i walked away, leaving him with a timer and the "I'll be back in five minutes to see how you're doing!" speech.

when i returned this is what i found: 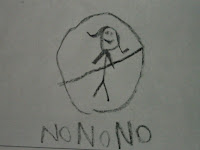 number 1: he got his message across in writing. that was a first!
number 2: his pictures match his words. universal no sign + no no no. pretty good.
number 3: his spelling is correct, no is a known word. he has spaces (kind of). his letters are going in the right direction.
i said nothing about his obvious message to me. as the other children looked in utter confusion i praised him for his fabulous job at writing words on a page that told a message. after that he wrote, a few simple words every day, but he wrote.
and i kept my portrait. because sometimes its ok when if they're mad at you.
Posted by organized chaos at 4:06 AM

I know this is not the point, but you have really sassy hair in that portrait. I hope it is a keeper and will have a place of honor in the new house.