in writing workshop in first grade today we sat down for the first time with our small booklets and let the kids loose to draw their pictures for oral story telling. one of my kiddos in this room has high functioning autism. i absolutely love this kid, but i was a bit worried about how he would handle the open ended assignment. in kindergarten he would usually draw one picture during writing workshop that didn't really give a hint at a story. maybe it was a scene from ET, or the mouse from chuck-e-cheese. we could get him to add words to these so we focused more on his phonological awareness than his concept of story. today i bit my lip as i approached him, wondering how he would deal with the assignment.

it turns out he did quite well. he put the story in detailed order. what happens first, then what happens a second later, and then a second after that...

here is the boy with the house 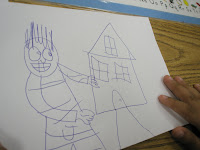 the boy walks closer to the house 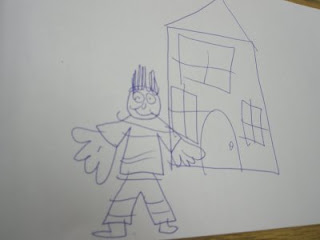 the boy opens the door to the house (what can you say, it is in complete sequential order) 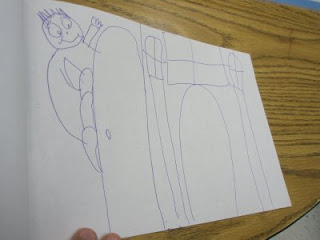 inside the house is a puzzle 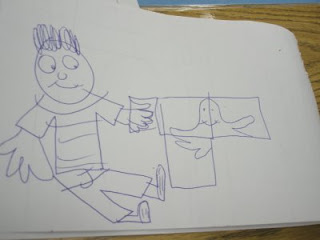 kind of makes me think of the story "in the dark, dark woods"

his neighbor told an interesting story as well, which really shown some light into his life. 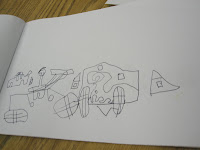 i hit a car with my bike 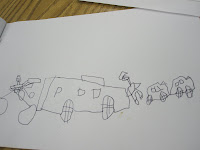 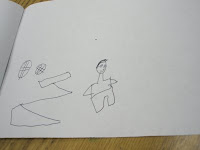 my bike was broken and the wheels came off. i was happy because i had another bike. 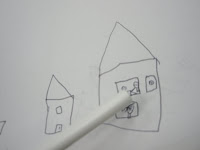 later the policeman came to our house. he wanted to see if my dad had something. he was just coming to check. here he is talking to my dad and mom. i'm over here at the other window. he didn't take my dad to jail, he just checked.

Posted by organized chaos at 4:49 PM

I love the drawings!

Both sets are amazing! The lines are so straight in the first one that it's really hard to believe the artist was only a first grader. The drawing with the door being opened really impressed me, because of the fingers on the hand opening the door. Amazing!