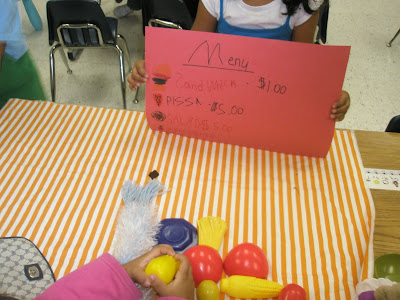 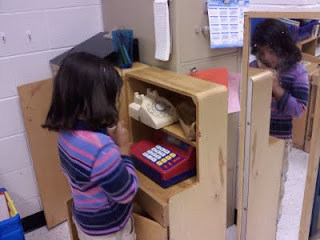 this year i'm trying something new at the house keeping/dramatic play station. based off of a study i read last year out of the university of virginia, i'm trying to use house keeping to teach social skills like self-advocacy, how to have a conversation, and turn taking. so far i'm loving the outcomes (although at times i have to admit i'm a bit tired of sipping my imaginary tea)

the study's goals were to teach children verbal skills during play as a way to prompt children from disadvantaged homes to use their oral language when problem solving instead of using violence. based on my own observations i have noticed that children who were not as exposed to as much language before entering school are more likely to be physically aggressive when interacting with other children. so, i figured they were on to something and thought i would test it out. my partner in crime graciously agreed to let me take over her house keeping center once again.

based on the structure the study suggested i first sit down with a group of children and read them a story about children at a restaurant (i took pictures of children last year acting out the parts). it's a fairly painfully boring story but in the story the children learn the vocabulary for what we are playing (in this case customer, waiter, menu, chef, etc) and they are given examples of how to interact. the characters in the story use one another's names when they talk to them, say please and thank you, and answer each other's questions.

once we've read the story we assign parts and then review the goal for the day. the first day i tell them they are going to talk to one another during play and ask each other questions. the second day i say their goal will be to use one another's names during play, and the third day the goal is to use their manners like please and thank you when they are interacting. i work with the same group of children 3 days in a row.

we read the story at the before play everyday, and to be honest, the children are modeling the characters in the book and saying please and thank you before we even get to day 3.

i let them play together and am there to coach them through the play by prompting them to use one another's names, look at each other in the eyes, etc. and to praise them when i notice they are achieving the goal. i try to scaffold my own intervention as well- i interact more on the first day, and then slowly back off letting it become more of their own free play.

when it is over we clean up together and then sit down and share what they did well. i try to think of something each child did that fit into the goals of our social skills.

what i've noticed so far is that the kids are doing a great job interacting. some of the children who tend to show us parallel play during other unstructured times are interacting spontaneously with the others after hearing the social story.

i've also noticed that it is great for prompting shy children to work on their self-advocacy skills, which is something i wasn't expecting. it's a perfect safe place to practice these skills though because the needs are pretend but the children still have to practice speaking up.

this week i had one little girl who just couldn't get into it. she stood and giggled the entire time and was over taken with the oddness of the whole thing. she's a very bright little child and i think she may just be beyond imaginary play (as sad as that is. i mean, i'm 28 and i'm not beyond imaginary play). instead she and i worked on making a sign for our restaurant as well as a menu. having the menu she wrote herself gave her a more natural 'in' into the game.

another aspect i stumbled into but didn't expect was that i have table clothes for them to choose from. after they've made their choice i ask them to work together to put it on the table, and then during clean up, i showed them how to fold it using two people. it's a great chance for them to practice working together and communicating with one another during a simple, non-threatening task.

after all the kids have rotated through with their groups i'm going to turn it into a vet's office and start the process over with another story and another set of skills to practice.

Posted by organized chaos at 2:19 PM

This makes me nervous! Are you doing it every day or are you giving them chances to decide on their own scripts. I ran a day care center for kids from very low income families for 18 years. One of the things that made dramatic play valuable was that it gave the kids the oportunity to play out upsetting situations at home. Not all of them did this but for some of the kids who needed it and trusted us it was invaluable. On a lighter note, it also gave the kids an opportunity to stretch their imaginations. There is a big difference between helping kids expand their play by adding props or suggesting additions to the "script" and dictating what they will play. This seems to have crossed the line. When do they have the chance to choose?

This sounds phenomenal! You reminded me that I really need to be using more social stories with my first graders. All of my students could benefit from extra coaching in social interaction; they also tend to use physical aggression rather than conversation.

Anonymous #1- I totally understand where you are coming from. I thought the same thing when I first heard of the study. As someone who grew up on 10 acres of woods with parents who said "they don't make tv that comes out here" I value imagination above everything.
Our kids have lots of time to stretch their imaginations and just be kids at other times in the day, or when they are not at the house keeping center. There is a group who tends to choose blocks so they can build a castle and act out what happens inside the castle.
One of the reasons I do it 3 days in a row is to back off a bit and give them time on the 2nd and 3rd day to drive their own play. And even on day one they are still driving their own play. They don't stick to the script as though it is a play- but they are following the modeled "thank you" "please" or "What would you like to order" language.
On Thursday they imagined they got a telephone call that their car was being stolen. Then the stuffed dog ate all the food. One little boy had friends who kept calling him so he was too busy to talk to the rest of us. After really watching the house keeping center for the past two years I saw all of the parallel play that occured- the lack of conversation, and the lack of play that is considered typical in 5 year olds. After realizing in grad school that the students in my school are sadly not typical, and knowing the impact social stories can have, I decided to give this a try.
We have so many different languages spoken at home that I think the scripts give the children a common language to use when they are playing together. Last year, without the scripts, I saw a lot of physical touch when they wanted one another's attention. There was grabbing, pushing, pulling someone's face toward you, or blantant ignoring peers request. This teaches them to interact with language instead of physical contact that is often misunderstood and ends up in fights. Instead of punishing them for the fights that break out we are teaching them how to interact without fighting.
Thank you for your input! You are so right- dramatic play can be so valuable for the children to act out situations, and explore their own imaginations.

Anonymous #2- Thanks! I do love social stories :) (and first graders!)