At the end of the day today the Story Teller burst into my room. I was busy trying to get paperwork completed before I had to run off to Jumpers practice so I barely looked up. He tends to come in every afternoon to say hi to the pet frog anyway, so I didn't think much of it. (After all, yesterday he came in and said, "Why Good Afternoon!" to which I replied, "Good afternoon Story Teller" He looked surprised- "Oh, not you, Mrs. Lipstick, Good Afternoon to the frog." Oh.)
"I have a present for Mrs. Happy" he announced and pulled out a square of white tissue paper. (It had been wrapped only moments before in his classroom). He hurriedly unwrapped it and thrust it toward Happy The Frog. "Ta-Da" he announced proudly. In his hand was his art project- the one he was suppose to give to his parents for Christmas.
"I wanted Happy to have a friend!" he explained. And as he said that Happy the Frog immediately swam to the side of her tank and went nose to nose with her new fake friend. 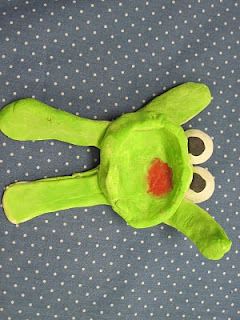 Is it not the cutest frog ever? If I was a parent and found out that my son gave that adorable frog to his teacher's pet frog and not to me I'd be upset. But no matter how many times I asked the Story Teller to at least take it home and show his mom he firmly stated that no, the frog was for Happy.
My awesome co-teacher suggested giving it back to him at the end of the year- which is perfect. In fact, so perfect that maybe I'll let him take home the real Happy the Frog as well for the summer.
When I returned from jump rope practice I tried to set the fake frog up so that he would be near Happy (to please the Story Teller) but in an old tank so the kindergarten students wouldn't knock it off and break him. And sure enough, after I'd gotten it properly positioned near Happy's tank, she swam right up and got nose to nose with her new friend.
Leave it to the Story Teller to know when someone is lonely and needs a friend.
*I cannot figure out how to turn the picture- but I also cannot figure out why it is coming out vertical since it was taken horizontally. anybody know why?*
Posted by organized chaos at 3:29 PM

Email ThisBlogThis!Share to TwitterShare to FacebookShare to Pinterest
Labels: the frog, the story teller

aw, sometimes kids can be so sweet- though that wasn't so sweet to his mom haha, but I think I'd be happy my kid was so giving