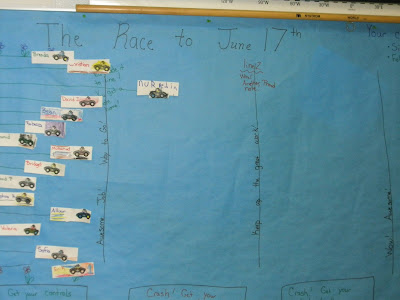 Last Friday after returning from the office where one of my little ones was being suspended, I looked out at the kindergarten room where my desk is and thought, "There is not a chance I'm going to make it to June 17th. Not a chance". If it was earlier in the school year, I thought, this kind of behavior would warrant a whole new behavior plan. But why now, with two and a-half weeks left?
But then I looked out again and decided, we're desperate. So my amazing co-teacher and I came up with a plan that really will only work for 2 and half weeks.
We have a "race track" where every student has a car. They've colored their cars and names themselves (they had the option of drawing their own cars, but every child picked the car I'd printed out for them- that's going in the wrong direction. I think the fact that all of our cars are going in the wrong directions is slightly symbolic of the year...)
The race track has mile markers and whenever your car hits a mile marker you get a note home telling your parents what an awesome job you did. The notes are pre-printed for teacher ease, we just have to put their names on them and then have the child draw a picture of what they were doing well to get their car moved ahead.
Cars move whenever the driver is following the teacher's directions or sitting quietly. If they get out of control and need to go to the pit to visit the mechanic, they go down to the crash-zone. Nothing happens to the driver, the car just goes into time out. Yet the children are still devastated when their car moves down (moreso than when we put the actual driver in time out. Somehow putting children in the "thinking spot" in our room has turned into a chance for them to be clowns, kick things, or take control of the classroom in their own little way. When their car is in time out they really don't have that opportunity). When the driver shows us one of the two magic behaviors, the car moves back to where it was before on the track. There's no going back or starting over- just a quick time out.
So far (after two days) it's been working. The kids are obsessed with the idea of the race and seem to love taking their notes home to their parents. A trip to the crash zone typically stops the undesired behavior, even more than putting the child in the thinking spot in the classroom. For some kids it is excellent because it really only focuses on the positive. They can track their individual progress and seem to be working on complying even when the group is not so that their car can be on track.
We'll see how it goes. It only has to last 2 more weeks. We've told them that we're happy to add more paper and make the race track go much longer if we need to and they're excited to "take their cars to the coat closet". I'm not sure it's the type of behavior plan that could be used throughout the year, but for this time in the year when you just need a little something extra to motivate them, so far it seems to be exactly what we needed.
Posted by organized chaos at 3:25 AM

Email ThisBlogThis!Share to TwitterShare to FacebookShare to Pinterest
Labels: kindergarten...wow, reasons to study for the lsat, wiggles

I didn't know you were allowed to play games where everyone wasn't always on equal footing. Some of those kids may get left behind!!

Oh my goodness. You two are BRILLIANT!

That's fascinating! I will be interested in hearing how it goes. I'm feeling rather stale in the behavior department.

Totally freakin' BRILLIANT!!! And no, it wouldn;t serve for a whole school year (in my opinion), but it is PERFECT for the last few weeks of school!