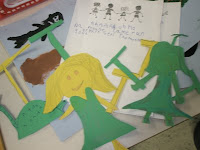 the oddest thing happened last week with my afternoon intersession class. they completely overtook the class. there were 21 first and second graders who somehow decided to turn my class on scrapbooking into writing and performing puppet shows. i was overruled as a teacher- overturned. i did nothing but find time during the day for them to do this (and if i hadn't i'm pretty sure they would have done it anyway).

on wednesday afternoon a little girl who marches to the beat of her own drum asked me if she could perform a puppet show for the class. some of the kids had already been making puppets when they finished their work but she wanted to go a step further- she wanted to actually put the puppets to use. so, ever one to know how to manipulate first graders, i said, "sure! but only if you write a script first"
"what?"
"a script- you know, what each person says. you have to write the story down"
"fine!" she stomped away. i thought the subject was over.

a little later she came back with a script and pushed it into my face. "i need two other actors" she announced, as though she was a hollywood producer. why not? i thought. isn't this what intersession is about? so i picked two little boys i thought could handle being bossed around and let the three of them go into the hallway to practice. they came back and performed for us right before bus call. it was exactly what you'd think a play written by a first grader would be like. it was titled, "two girls scared of a mouse" and consisted of the lines,
"oh no!"
"oh no!"
"a mouse!"
"run!"
"ahhhhh!"
"get away!"
"ahhhhh!"

ok, not fine theater. not even creative writing. and somewhat painful to watch. but they'd had absolutely no adult instruction. and the class LOVED it.

the next day two boys ran to the door of my classroom waving a paper in my face. they'd written a play on their own time and wanted to perform it for the class. the little girl had returned with her second script and others were asking if they could do plays as well. i really didn't know. this seemed like it had potential to become insane- everyone would need to be put into groups- they'd need instruction (on what, i don't know, but i have to teach, right?) so i put them off and made them do their work first.

but when they finished their work and while i was busy helping other kids they were slowly putting themselves into groups, making new puppets, and working on the scripts. finally i realized what was going on and gave in. we cleaned up early and i gave them time to practice with their groups and then perform for one another. it was the quietest they'd ever been and they were working in groups to plan their plays. i expected fights, hurt feelings, ripped puppets, and arguments. but there wasn't any of that.

i was bored. i was the teacher and i had nothing to do.

and i was pretty impressed with their puppets and their sets. one even had a rotating stage (like in noises off). the gingerbread man's set was detailed to include an oven with a door that opened and closed.

they were again enthralled by one another's plays. i mentioned this to the teacher across the hallway and she said she wanted her class to come see it, so, i thought, why not. they weren't good plays by any stretch of the imagination but we're trying to kill time on the last day anyway. somehow more classes ended up hearing about them and coming to watch them. (the last day of intersession we're really looking for something to do to keep kids busy)
my kids sat through one another's plays three times that day and still hung on every word.

it was one of the oddest things that has ever happened to me as a teacher considering the class had only been together for two weeks. this is what you'd want to have happen in your class in the spring, or even by november when they've been together awhile. but not those first couple weeks. it was the right mix of kids- the right amount of students with great leadership qualities, the right amount of kids with good problem solving skills (i broke up no fights, i solved no "what if" problems).

the only thing i did as a teacher was say yes and agree to let them take over. i don't think anything they did was "measurable" in terms of testing and accountability. but it was a group of esol students who used their english to write a play, make the puppets and the props for the play, direct the play, and work together and problem solve so that they could perform.

i love intersession and the time it gives us outside of the curriculum to let kids be kids.
Posted by organized chaos at 12:08 PM

I don't care if it's measurable or not, that sounds like success to me!!

love this. thanks for sharing. : )