the first of april

i hate april fools day.
i'm a very trusting person, so i tend to fall for people's pranks. since i started teaching i've learned to have a whole new hatred of the day. first graders have a very odd sense of humor. few of them have actually developed an adult sense of humor yet and so their day-to-day jokes usually involve words they find silly like "chicken", "zucchini" or "underwear". if you think i'm kidding go into a first grade classroom and in your most serious voice say one of the words. they'll die laughing and you'll be checking a mirror because you'll assume there has to be SOMETHING ELSE wrong with you that would elicit such giggles.
so, when you combine that sense of humor with april fools day you end up with a lot of "hey! look out! there is an elephant behind you!" jokes. all day.
this leaves you with three choices.
1) you can play along "oh no! not an elephant! oh man, you got me". this just encourages the rest of them to repeat the SAME joke OVER AND OVER again.
2) you can absolutely ignore that the child said anything and continue to teach. this usually makes them repeat it over and over again to see if maybe on the 100th millionth time you'll fall for it.
3) you can get angry, tell the child you are not falling for it, send child to thinking spot, declare that you are not playing april fools. this, of course, is simply an invitation to see if they can create greater pranks that can actually fool you.
so really, the best choice of all is to declare the day march 32nd or just ignore calendar time all together and hope that nobody told them about the day.
i was hoping to go with the last option but on the walk from the gym to the classroom with my morning intersession class i was told no less than 15 times that there was something in my hair/ someone was behind me/ there was something on my shoe/etc. (the only one i fell for was a little boy who told me his grandmother died. not cool).
i couldn't take an entire day of this. i thought about calling in sick right then and there at 8:30. but instead i did what good teachers know to be the best strategy: discuss and then distract.
so we decided to discuss april fools day and examine what it means. this discussion lead to a suggestion that we play a prank on the intersession coordinator (knowing that he has a great sense of humor). just getting them focused on this ended the "oh no! an elephant is coming in the room!" after a long discussion of all the things we could do (and listing all the things that are not ok to joke about- death, getting hurt, fire) i convinced them that we were going to do the best joke ever. i really had no idea what we were going to do, but as i listened to them talk i channeled frank mccourt from Teacher Man, who gave his students an assignment to write fake excuse notes.
my brilliant young minds were to write apology notes to the intersession coordinator apologizing for some horrible, horrible crime they did not commit. some apologized for bring their pet to school, others for bringing toys, some claimed to have broken computer equipment, others gave everyone chocolate and made them hyper, and my favorite apologized for bringing his wild african pit bull to school. they put so much effort into the details of these crimes. one very sweet girl who would never, ever even breath the wrong way wrote a front/back letter explaining everything her bunny had destroyed in the classroom. some went into detail explaining about how angry i was. you know, just to make it authentic. 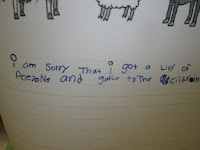 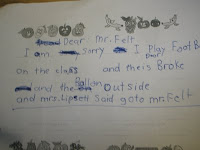 the plan had been for us to line up and send two children at a time to the office until eventually my entire class was in there. sadly we ran into the intersession coordinator in the hallway who immediately figured out what was going on (but still played along). he apologized for not being in the office but directed us to take our letters to the secretary so she could discipline the children.
so my students, one by one, busted in on the poor office staff, who were biting their lips to keep from laughing as my innocent children claimed to have brought their baby brother to school, etc. the kids thought this was the funniest thing ever so they were laughing and proudly waving their fake crime letters at any adult who would listen. when someone responded, "wow, you are really bad!" they'd laugh even harder.
as we filed out of the office and back to the classroom they continued laughing. "man, we got them good!" i heard. and "best practical joke ever!!"
despite the obviousness of it all they still thought the joke worked.

and, i have to say, i'm feeling fairly pleased with myself. april fools day little first graders- i distracted you from your hours of painful jokes AND made you write using details. 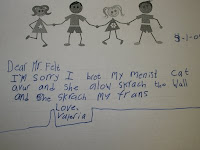 Posted by organized chaos at 12:35 PM

Email ThisBlogThis!Share to TwitterShare to FacebookShare to Pinterest
Labels: i heart first graders, reasons to study for the lsat, teachable moments

I did something similar. Getting the kids to play *one* joke together is a much more effective way to deal with the day.

Great idea!! I'm sure they had a blast and had no idea they were learning at the same time!

Oh, gosh. This is awesome. I started off the day saying we weren't going to have April Fools, and aside from a few, "You're house is on fire! haha, April Fools" jokes, the kids pretty much let it be. I like your idea much better though. It embraces the idea of April Fools, and is education!

Wow! What a fantastic story!! And hats off to you for deflecting all of their "jokes" :)