We're currently in our two week intersession where students get to take two different classes- one in the morning and one in the afternoon. since we're year-round it's two weeks that would be a part of our summer break and we get paid extra to teach classes. it means we kind of get to be like super tenured professors at small liberal arts colleges- we get to teach courses about any speciality we'd like.
i of course, chose a class that is the definition of organized chaos. we're scrapbooking and it mainly involves letting the children have almost 2 and a half hours of arts and crafts time. i stop them occasionally to show them a new technique or to add another sort of special paper to the stack, but mainly they work on their own. 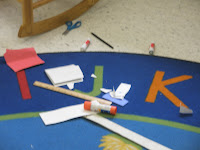 and make a big, big mess. which i am constantly telling them is ok- as long as we clean it up really, really well at the end. i love watching some of them embrace this new messy philosophy and others struggle with the idea that i'm telling them it is ok to be messy. some do really well with the open-endness of it all. and others seem lost- you mean, you're not going to tell me exactly what to put on my paper? i don't understand. 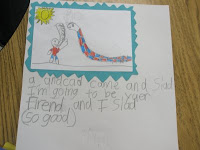 if they bring in pictures from home they are welcome to use those (as long as mom or dad said it was ok for the pictures to be cut, glued, stapled, etc) but for the many who don't they draw their own memories. 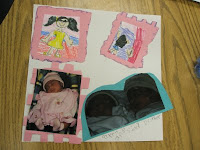 this little boy suddenly came up with the idea of framing his picture with christmas trees. his picture had nothing to do with christmas trees and his measurements were completely off so in the end you can't actually tell they are trees- but regardless he spent the better part of an hour carefully cutting out each tree and pasting it onto his border paper. then he became inspired by the way the orange paper looked with the white tree trunks and he started another border paper where he cut out the orange paper to match the white-trunk pattern. 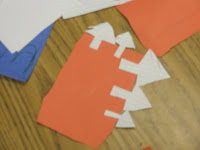 i teach them to measure (all of the pages for their books must be 9 inches by 9 inches) and then i teach them to measure the border paper that goes around their picture. while i personally would never take the time to measure like this for my own scrapbook, it's good for them to know how to use rulers right? (plus there was a time when i could have told you the SOL number for that state requirement). 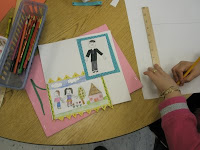 the problem is i find myself torn between making sure everyone is doing a scrap booking activity (this is school and i'm suppose to be in charge- right?) and letting it become an arts and crafts extravaganza (the chaos part). a boy today began teaching others how to make water colors like eric carle. before i knew it his entire table were crumbling up their papers and dipping them into the watercolor brush water. while the outcome was awesome the paint dripped across the floor and their tables (and their clothes). yesterday a group decided to take the scrap paper and make hats for themselves. they put a lot of effort into these hats but today i crushed their little hat making dreams because it wasn't something for their scrapbook- but really, when else will they have such freedom with a set of arts and crafts activities and someone saying, "you know what, be creative? what else can you do with that scrap paper?" hmmmm.... maybe i'll let just have everyone make a "scrapbooking hat" tomorrow. don't we all work better when we have costumes?
Posted by organized chaos at 3:15 PM

Email ThisBlogThis!Share to TwitterShare to FacebookShare to Pinterest
Labels: i heart first graders, reasons i love my school, what was I thinking?, wiggles, year-round