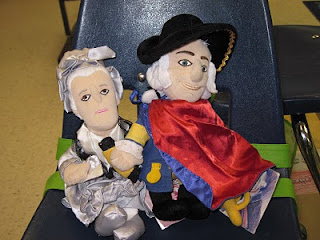 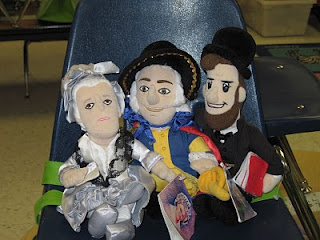 American George
When I first started teaching my mother gave me two of these "SOL dolls". She'd discovered that someone was making these dolls of people covered in the Virginia Standards of Learning (although you may assume they are SOL for their unfortunate noses...). She thought that every first grader needed the opportunity to play with George and Abe. I've added Martha & Ben Franklin to the collection, as well as George Washington Carver (not pictured here) because he is my favorite.
My second year teaching these dolls became an absolute favorite in the classroom during free time or indoor recess. I happened to have a little one who was obsessed with presidents.
Obsessed is an understatement.
He kept tabs on the presidential election daily, once a week wore a suit to school, started debates in the classroom over the current president's decisions (this is first grade mind you) and got in fights with friends by calling them a 'lame duck'. He wrote a book explaining the senate, and another about Teddy Kennedy. He'd bring the newspaper into class every day. His parents begged me to try to get him interested in sports- anything but politics as a first grader- what happened to liking dinosaurs?
His obsession was quickly picked up by the rest of the class and I'd have boys who'd ask to play with these dolls whenever they could. (It may have helped that George has a sword.)
The best was that George has a blue cape with a red lining. So my future president would start out the play, every time, with the red cape facing outward, representing when George was British. Then, after a scrimmage, he'd switch the cape and suddenly become a Colonist.
Posted by organized chaos at 2:40 PM

Email ThisBlogThis!Share to TwitterShare to FacebookShare to Pinterest
Labels: i heart first graders

Sooooo funny. Thanks for sharing.

I know this is terrible, but I thought you meant that the "American George" was American because he's giving Ms. Ross googly eyes, heh heh heh! Politicians!!