Is anything worse than un-made ice cream? 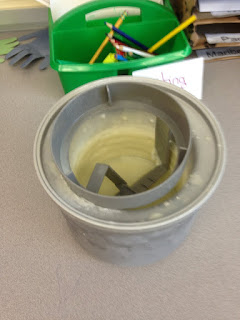 Today was horrid. A might, gigantic flop that left me driving away from school thinking that this job is just not for me. Not that I'm not enjoying it, but that I'm just not good at it, and that the kids deserve someone better.

Let's start with the ice cream.

Last year I did an amazing ice cream unit. It was the stuff teaching-dreams are made of. We made ice cream one day and then spent the next day giving people a taste test of ice cream to decide what they liked better- our ice cream or store bought ice cream. We graphed it and analyzed our results. It was one of those magical, amazing lessons that you don't full appreciate until it's a year later and when you try to repeat it ice cream blows up in your face.

In the midst of trying to get the materials out of the freezer, deal with behaviors, check in with other service providers and just generally trying to remind myself where I was I made a glaring ice cream error. In a moment of lost common sense I decided to have the kids pour the ingredients into the ice cream churn itself and then turn it on. This decision was made quickly, based on the current (read: crazy) behaviors in the room.

It was not a decision made logically.

We are working on using and applying the words "on" and "off" so I made a big deal of turning it on. I asked one of my girls to come turn it ON. We sat back and watched in with the hope and excitement one has whenever ice cream is about to be made.

The ice cream maker rocked on itself a few times and made a horrendous grinding noise and then stopped.

"I'll turn it OFF" I said,  never one to lose a teachable moment. "Turn it ON again."

She did, and it repeated its unproductive movements.

It was then that I realized my horrid mistake. Of course if you are not moving the ingredients around when you put them together in the cold ice cream churn it all freezes together at the bottom of the churn, and will not, in fact 'churn' as it is named to do. I jammed and pushed and tried to break through the frozen sugar at the bottom that was making it impossible to turn but that only made the milk and cream fly all over me.

While I was desperately trying to salvage the ice cream (and failing) one of my kiddos took the opportunity to run around my room and knock things off shelves. She has never, ever done this before, but apparently failed ice cream leads people toward destructive tendencies. I can't stop her immediately because I have would-be-ice cream all over my hands, pants, face and hair.

What's even worse is that although my children were upset, they didn't understand why they were upset. I wanted to turn it into a "sometimes we fail and that is OK" lesson, or even just a "it is OK to be sad but we have to try again" lesson, but they barely batted an eye.

This led right into lunch time, which made me realize that I'd actually forgotten my lunch. Now I was hungry AND ice-cream-less.

The day was almost over- five minutes before dismissal in fact- and I took one of my students aside to talk about his day in PE. I'd gotten an email from the teacher telling me that he wasn't doing so hot. I talked to her and then said, "Next time you will do your work in PE."

He paused, looking pained. After a moment he said, "Well....  Maybe, maybe not."

He paused again, looking like he hated to break the news to me but it just couldn't be helped. "No, I don't think so, Mrs. Lipstick."

At least he was honest?

Posted by organized chaos at 4:22 PM

Email ThisBlogThis!Share to TwitterShare to FacebookShare to Pinterest
Labels: reasons to study for the lsat, stress, what was I thinking?

You're just teaching your kiddos some flexibility :) We had an ice cream party earlier this year and I was trying out my maker for the first time. Well, I didn't realize that you had to freeze the bowls beforehand... so we had to wait until the next day. Not fun, but oh well! They still loved it once we actually got the ice cream.

Holy Cats! That is a bad day, indeed. The students sound like they took the disappointment pretty well. If I had ice cream on my mind and then got nothing, I might have reacted a little more poorly than knocking some stuff off of a shelf. Great story Mrs. Lipstick!