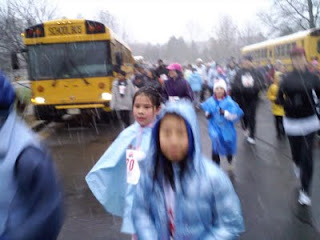 This morning I dragged myself out of bed at 6 on a Saturday to participate in Girls on the Run. 6am the morning after our staff Holiday Party. 6am on a Saturday after a really long week. 6am only to spend an hour standing in the rain, 50 minutes running in the snow, and 30 more snowy minutes helping girls find their parents. My buddy runner is lucky I like her so much.

I LOVE the Girls on the Run program. It's a nation-wide program that gets elementary school girls involved in running. For an entire semester the girls train for the race, meeting two days a week after school to do motivational activities, build their self esteem, and train for the 5 k. They learn to set goals, work hard, push themselves, set personal goals, and feel proud when after all that work they cross the finish line. At the end of the program the girls run a 5 k with all the other GOTR teams in the area. Each girl has a buddy runner (an older runner) to encourage them to make it through the grueling 3 miles.

When I started being a buddy runner with the program almost 5 years ago it was much, much smaller. A friend asked me to be a buddy runner for a girl at her school. The race was small-all the girls fit inside an elementary school cafeteria. 5 years later the program has grown considerably- I heard someone say there were 5,000 runners there today.

Now it's such an event you have to plan to get there an hour in advance to have any chance of finding parking and navigating traffic in time for the race. As it's grown it's definitely changed it's attitude a bit. The program itself hasn't, but it has brought with it the ubber competitive parents this area is known for (but that I never deal with at my school since those families do not live in our district).

A few years ago, stuck trying to get into the exit lane on my way to the race, I witnessed quite the fight between a Mercedes and a BMW- both with their runners in the back seat. On the way to a race that isn't about winning or losing. After making many attempts to cut the BMW off- (every time the Mercedes tried to cut into the exit lane the BMW scooted up ) the Mercedes rolled down the window and yelled what I can only assume was extremely rude because the BMW replied by forcefully putting her hand out the window and sticking up her middle finger. Don't you love how we are all such good role models for our children?

Those are the parents who come to the race in their own racing gear, yell at their children to run faster, announce that they are extremely embarrassed by their daughter's desire to walk, and- my personal favorite heard today- "Fine! You want to run this slow? No hot chocolate for you!" no less than half a mile into the race. Or later, "I never want to hear you say you want to play in the snow again- What do you think you're doing now? It's snowing! This is playing! Stop complaining about being cold!" I'm sure her daughter really felt the playful spirit at that very moment.

I wont lie- running with a buddy runner is painful. The first time I did it we did the 3 miles in about 2 hours. I didn't know it was possible to walk 3 miles in 2 hours. Let me tell you- running it in 20 minutes would have been less painful (and a lot more fun).

I ran cross country in high school and college. I know how to run a 5k. Running a 5k- running it fast and well- is something I take pride in. Running a 5k with a 10 year old? That's a whole different ball game. You swallow your pride, slow your pace, enjoy the experience of introducing someone to the sport of running, and find ways to cajole them into running a wee bit faster without breaking their spirit.

Some parents just don't manage to understand that. The girls I ran with today eyed me oddly every time we ran behind a parent giving the "How do you call yourself a Smith if you run like that?" We slowly ran around them, eyes down, wishing the girl was running with one of her teachers who would happily encourage her to run faster. I picture those girls in high school sports, applying for the "best" colleges, taking AP tests. Those girls have a long life of not meeting high expectations ahead of them... And so, my little group ran faster, back to our happy little world of "We can do this! Don't walk now! We're awesome- you don't' need to walk!"

Today we ran, walked a bit and then ran again, in sleet that slowly changed to snow. At one point I looked over through my foggy glasses and noticed that one of my girl's eyebrows was frozen inside a patch of ice. The bottoms of our pants were soaking wet with freezing water. Our fingers could barely move individually. We were cold, wet, and tired.

As we finished I heard a little girl behind us squeal with utter delight- "I did it! I didn't think I could! But I DID IT! 3 miles!" With that my two runners and I looked at each other and smiled- We'd done it too. Despite the wet coldness seeping into our bodies we had finished the 5k they'd been training for since September. For one of them it was her first 5k. Their big smiles made rolling out of bed so early worth it.

Of course, as soon as we could we headed to the nearest Starbucks. Because it was cold and wet, we were covered in snow, we were tired, and we deserved it.

Posted by organized chaos at 2:41 PM

Email ThisBlogThis!Share to TwitterShare to FacebookShare to Pinterest
Labels: random, reasons i love my school, what was I thinking?, whats really important?