Anyone who hasn't been in an elementary school in awhile may not fully comprehend what the 100 days of school is. I've heard confused parents ask why on earth we would celebrate such a bizarre feat, comparing it to giving every child on a soccer team a trophy. It is nothing like that. It is a way to totally trick your kids into getting ridiculously excited about math and doing math activities all day long. And maybe a bit about tricking you into collecting 100 of something around your house. Because, you know, it's important for you to count out 100 paperclips with your kindergartner.
Reading has Dr. Seuss's birthday, now math has the 100th day.

I've had years where I've practically ignored it and years I've made a ridiculously, amazing deal out of it. This year was something in the middle. It is too good a math opportunity to pass up, but with Valentines' Day the following day there was no way we could take a total change of routine.

Still, we started the day by doing 100 exercises (Thank you Splattypus- you may not be in the classroom anymore, but your ideas live on! Wow, I miss co-teaching with you.)  We did 10 reps of each exercise and I let the children choose from an exercise menu- jumping jacks, pretending to jump rope, stretching, knee lifts, etc. Nothing too strenuous  but enough so that we had something to cross off. We kept track of each exercise by taping it to a sentence strip and counting off. We taped all of the sentence strips together to really get a sense of just how BIG 100 is. That's a lot of exercises. 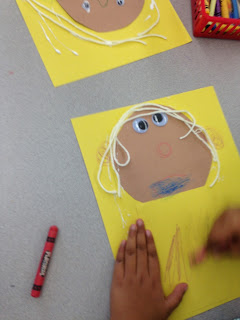 My favorite activity I did this year was our age timelines. I'd asked all of my students to bring in baby pictures. I copied them on the copier so that we could glue their adorable baby pictures to a large chart paper. Then I had a picture of them in school right now. Finally I had them make a picture of what they would look like when they are 100 (which is totally an idea stolen from another teacher back at the think-tank). We put everything in a line (making a timeline is a standard we have to cover). The kids LOVE walking past their timelines in the hallway and checking out their baby pictures. I also love that I have their baby pictures. There is nothing like seeing your students as babies to make you feel empathy for them and help you gain a new perspective on their lives.

I did make the huge mistake of asking them if they thought I was 100 years old when I introduced the activity to them. Luckily none of them said yes. Next year I'll be far more careful with how I word that lesson...
Posted by organized chaos at 3:30 AM