Until this year I've never seen curb cuts as anything but a good, adapted measure to make our communities accessible for all people.  A design that allows people in wheelchairs to safely and easily access the sidewalk. I've never seen them as anything more or less than that. 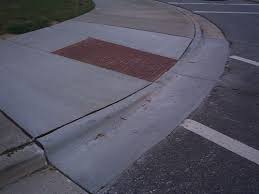 Now I see them as a brief yet necessary torture device for one of my friends.

One day earlier in the year we were walking to the bus, chatting away and my friend drove his wheelchair around the curb cut. Instead of safety and gradually rolling down the sidewalk he fell right over the edge. I panicked, of course, imagining my friend catapulting out of his chair, or even worse, having his chair fall on top of him (it didn't, of course, but the possibility was there). Stupid me, I thought- my friend needs to be taught to use the curb cut. If I don't teach him this skill he has no idea to look for the gradual incline.

So the next few afternoons I made it my business to teach him how to look for the ramp. He continued to tried to avoid it, and I just chalked that up to him not being able to see. The motor planning it takes to project your chair in the right direction is actually pretty tough. When he's in the chair his visibility is limited and he can't see what's right under neath him. So he has to look ahead and plan where he'll aim his chair for when he gets there. Think of how this was difficult to learn to drive when we were 15- remember our parents yelling at us about appreciating the size of the car and planning ahead so that we wouldn't roll over the sidewalk? Yeah- he's 6 and he has an intellectual disability. Aiming his chair down a ramp is actually hard work and involves a lot of executive functioning.

But after watching my friend for a few weeks I realized his aiming his wheelchair around the ramp has nothing to do with his executive functioning. He hates the curb cut. He drives his chair up to it, stops, takes a breath, says "Here we go" and then, holding his breath drives down it.

The curb cut is bumpy, as all new curb cuts are, which I am sure is an ADA regulation  But for my tiny friend in his big wheelchair these bumps are killer. He bounces around like a rock in the back of a pick up truck. When he gets to the bottom he stops his chair, wipes his brow, takes another deep breath, and moves on.

It's a few seconds every afternoon, but my heart goes out to him (and he still needs to be watched closely because otherwise he'll choose to drive his chair straight down the sidewalk- one big bump is preferable to him than the many little ones).

There really isn't anything we can do. It's how he gets to the bus. It's so sad to me that what we've put in place to make our environment safer for him is actually working against him. Until watching his little face go down the bumps I never would have looked at the curb cut and thought anything but, "Oh good, I'm glad that's there." Now all I see is what he must see- a momentary torture device he must conquer every afternoon before he can finally go home.
Posted by organized chaos at 7:22 AM

Email ThisBlogThis!Share to TwitterShare to FacebookShare to Pinterest
Labels: inclusion