Falling in love with voice thread

I've recently gotten back into making voice threads with my students. It was something I was completely intimidated by until I experimented with it last year and found that it is fabulously easy to use. Then I went on maternity leave and forgot all about it.

My retelling project (more on that later) has evolved into making voice threads of our stories after we take pictures of ourselves acting out the stories with our awesome toys from donors choose (thank you, thank you, thank you!!)

I've discovered that for my kids voice threads can open all kinds of doors in writing workshop. It gives them the opportunity to publish their work even when they are unable to draw a picture that can be recognized by someone else.

One of the text types we are suppose to teach in kindergarten is writing 'How To' books. Now I feel very strongly about having my students exposed to the kindergarten curriculum but I also know just how difficult it is for the average five year old to write a 'How To' book. I was DREADING this unit.

Then it occurred to me that for my class writing could be orally recoding our sequencing along with gluing down the pictures of the project in order. Sequencing is an essential executive functioning skill and having them order pictures, talk about the pictures in order, and then listen to their own sequences helps support this growth.

It was awesome to see the pride they've taken in their work, their developing understanding of sequencing, and their ability to use voice thread almost independently.

Check out in our voice threads here! 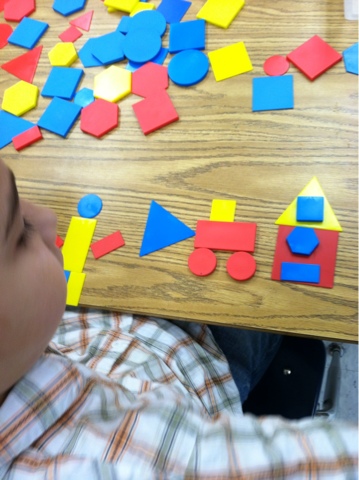 Posted by organized chaos at 3:48 PM