The Freedom to Tinker, Explore, and Problem Solve

Since moving out of our very small town house into a single family home I've found that we have a bit of space in the unfinished part of the basement to dedicate to solely to crafts. My mother had done this for me when I was little and gave me a craft space out of the way of my younger brothers where I could create anything I wanted. I decided to do the same thing for my three year old. 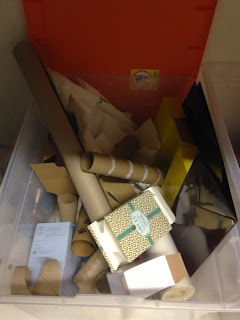 The first and probably most important aspect of our craft area is the tub of trash-turned-treasures waiting to inspire an idea. I throw in paper towel rolls, egg cartons, interesting boxes and anything else that I suspect may inspire creativity. Obviously I don't let it get out of control. If the box is full then it's full- nothing else will be added. It's one tub and is kept out of the way under a shelf. I just toss items in here that would otherwise head for the recycling bin. I also keep other items on hand for her to use such as ribbon, pipe cleaners, paint brushes (she has to ask to use the paints), and glitter pens. She has easy access to all of these so that they can easily inspire a creative idea. Items she needs help with are kept visible to remind her she can use them, such as the button jar, a glue bottle, and  the paints.

Since we started using this for arts and crafts I've noticed a change in how my daughter approaches projects. The other day I was finishing up an egg carton and she asked me if she could use it to make a train.
"What do you mean?" I asked, feeling lazy and not wanting to take the carton down to the basement if it wasn't actually going to be used.
"First I'll cut it here, and here, and here. In half. And then paint it and put it together like a train" she explained. (She doesn't actually know what half is, but it was a nice attempt at using a new vocabulary word.)  Her plan was enough for me. We put it aside and this weekend while her sister was napping we got it back out. 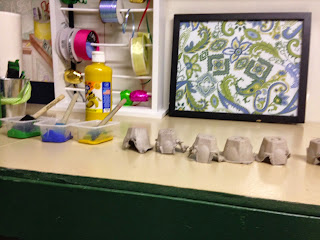 She carefully dictated to me the exact steps. I (tried) to only do what she said. She gave me exact directions on how she wanted it cut. Then she stared at the pieces of the carton for awhile before deciding how she wanted to decorate them (with pieces of the Frozen ribbon, *sigh*) and then put them together. She needed me for the cutting, putting holes into the egg carton and squeezing the glue out of the bottle, but other than that she worked independently, problem solving and narrating as she went. 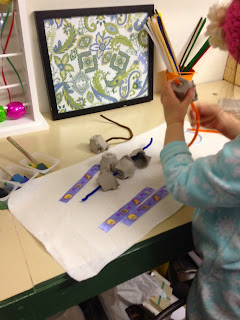 As we've done more and more of these projects I've watched her ability to plan a project, organize the steps, orally explain what she wants to do, and problem solve when it does not work flourish. Her art project certainly does not look academic, but the skills she's learning from having the mental and physical space to create are what I want all children I work with to have. More than rote knowledge, the ability to set a goal, develop steps in order to meet that goal, and then to problem solve when needed is what helps us be successful as human beings. There has been so much talk about grit and executive functioning skills in education in the last few years, but not much has changed in schools to help students gain these skills. We may talk about goal setting more than we did before, but we often are not providing students with safe opportunities to practice their skills. There just isn't time. We are too focused on improving the academic skills we can test. Yet these are the skills that make the difference in the achievement gap. Children who have the freedom to explore like this at home at an early age, and those who do not. We have to be able to find a way to give all students a chance to practice these skills so that they can use them with confidence when the stakes are high. 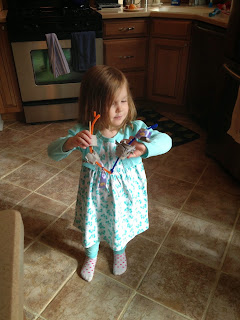 My daughter's train does not look much like a train. Yet she is ridiculously proud of her creation. What more can you ask for?
Posted by organized chaos at 3:00 AM

OK. You have described exactly how a good early childhood program approaches art and creativity. Now go out and find one that does just that!

What a wonderful opportunity for your little one. Good job, Mom!

Yes jwg! That is exactly what I am looking for. Any ideas where to find it?

Assuming that you are in NYC, if money is no object the obvious choice is Bank Street. Beyond that, I haven't a clue. Try centers on college campuses that have early childhood programs. Some may take outside kids.

My siblings and I did a lot of this (although to be honest, without the level of adult help and supervision you provided to your daughter, because there were 4 of us born in 4 years). But the best projects were ones we did outdoors in the yard, using natural materials (sticks, mud, leaves, stones, etc) partly because with no clean-up to worry about we could be as free as we wanted. This was a good thing because none of us went to pre-school and by the time we got to K the school was massively overcrowded and "art" was pretty much coloring with crayons.