In the first nine years of my teaching career barely a day went by when I didn't ask my students to turn and talk to each other during a lesson. Once the strategy was introduced to me in my first year I found it invaluable. It encourages children to be engaged and actively participate during what would otherwise be a one-woman show, it forces everyone to be interacting with the concepts and ideas of the lesson, it gives you a chance to take data and do a quick assessment on the whole class' understanding, and it teaches children to listen to one another. Plus, 9 out of 10 times the lesson goes deeper than you expected it to when you get those little minds working. In general, asking children to talk to each other- however you want to call it- "eye to eye, knee to knee", "turn and talk", "turn to your talking partner" "talk moves", is one of those teaching strategies that once you start you can't stop. As a general education teacher I often found that if a lesson was going south it was because I hadn't put enough partner talk time into the lesson.

In the beginning of this year, however, I didn't see how it would be possible. My kids have a difficult time forming sentences and some of them are non-verbal. Asking them to talk to each other didn't seem very fair or productive. So I sadly let it go as one of those "that's for other classrooms".

In the beginning of March, however, I was at a training with some general education teachers from my school who were talking about different ways to use turn and talk in the classroom. At first I started to get nostalgic for the days when I could get powerful whole class discussions from turn and talk. Then I started to wonder why I needed to be nostalgic  Listening to the group of teachers talk I realized that I didn't have to give it up. I just needed to modify it, and make it an accessible strategy for my students. There was still value in doing it, and if introduced correctly, my kids could still benefit from it just as much as the general education students.

SO, I started with the weather.

We talk about the weather every. single. day. I know I'm personally tired of charting the weather, but its one of those routines that you just do.

So why not turn weather into a time for talking?

I set up my class ipad with the Answers HD app which works as an assisted communication device. My non-verbal kiddos can look the picture choices of the weather and hit the ipad button in order to tell their partner what the weather is. If I didn't have the ipad, however, I would just use a sheet with weather choices on it so that the children could point to what they thought the weather was that day. 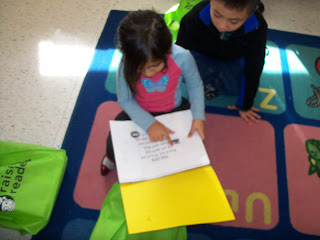 n one day they got it. One day I said, "turn and tell your partner what you think the weather is" and there was immediate movement. Immediate conversation. Immediate button pushing.

Now that we've got it down we're ready to generalize our partner-talking skills into academic areas. I can start asking them to partner-talk during reading and math lessons as a way, just like with the general education population- to get the more involved and active during a lesson. AND, now if they are in the general education classroom and are asked to turn and talk they'll know exactly what to do. It makes inclusion that much easier.
Posted by organized chaos at 5:28 PM

Although I'm also teaching special ed, my group of learning support students often resemble the general ed. population closely. I love to use "turn and talk," but there are a couple things that bother me. There are certain kids that I use the strategy specifically for (and it ends up benefiting everyone), but I so often see them sitting there and not saying anything or not even listening to their partner. If it's just one kid, I can monitor that partnership, but if there are a bunch of kids with different partners, I can't get to all of them before the rest of the kids are done talking. I feel like I'm still missing kids. Am I doing something wrong? Or do I just observe and it can inform me about who will need reteaching based on the blank stares on their faces? Sometimes I feel like I'm relying on other students to correct their partners who didn't understand. Is that OK?

I can very clearly picture your scenario because I've been there many times. The downside to turn and talk is that it is hard to manage everyone, and it is difficult to get some kids to participate. We can't actually force anyone to talk.
Using visual choices so kids can point to their answer can help shy kids, or kids just learning English. Asking kids to restate what their partner said can sometimes work as well. They don't feel the pressure of being wrong or coming up with their own answer, but they become actively engaged through listening and restating the information.
If I think of anything else I'll let you know!