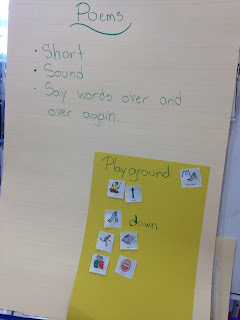 The general education kindergarten classes, who I just started planning with, are doing a poetry unit. Listening to them plan their unit once again made me nostalgic for teaching gen ed- I loved teaching poetry! I loved pulling poems from kids and exposing them to poems that don't rhyme. I found that students who have difficulty composing stories or essays felt much more successful and safe writing poems.

How on earth, I wondered- was I going to take poetry and bring it to my students? I struggled with this all week, wondering how I'd get them interested in poetry and then how we'd even begin to write a class text, let alone how they'd write independently. 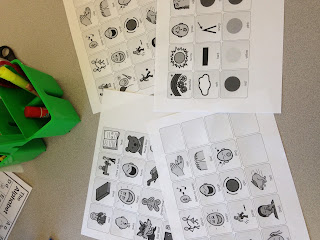 After a lot of thinking as well as a lot of promsing myself that it was OK to try something that may utterly fail, I printed out a lot of Board Maker icons. I made 3 pages that each were on a topic- one was on the playground, one on reading, and one on dancing.

Then I modeled using the icons to write a class poem. We wrote about our brand new playground. I was surprised and shocked at how well my kids did choosing words for the class poem. When they were given a list of words to choose from they were excited to decide which words to use and which to cast away. Some even decided on words we didn't have pictures for, so we wrote the words in. 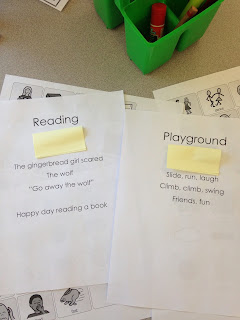 After writing the class text we got to work on our own independent poetry writing. Each child was able to choose their topic sheet, and then could select the words they wanted to use to describe their topic. Some were fairly perscribed, but others went outside of the box. Having the word-bank to ground them they were able to think of other words they wanted to add to their poem. 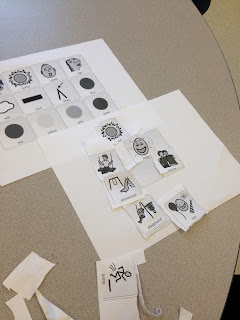 One of the best parts about it was that it was fairly independent. They got serious about their cutting and without me having to prompt them they cut, glued, and re-read their poems proudly. It was fun to watch their serious faces as they carefully selected their words.

Afterwards I asked them to read their poems to me and I typed them on the computer. The poems didn't necessarily match the pictures word for word, which was good because it allowed them to be creative in their own poem.

I love the reading poem. I love that Rock Star's idea of reading a book is the excitement of a scary wolf running away.

Posted by organized chaos at 3:30 AM