Subtitle: What happens when children are only allowed to watch PBS 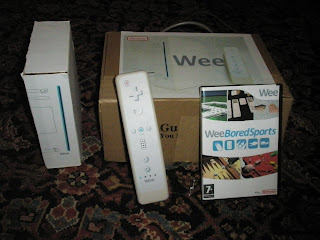 (Please note the 'hungry, hungry hippos wee game along with the backgammon and solitaire sets)
This is what my husband and I got for Christmas from my brothers (seniors in college). The picture does not do it justice. The wee remote is a handle of a phone (a working phone... my dad and I are fighting about whether or not I get to keep the remote or if it has to be returned to its original use). This is my favorite Christmas present by far, and extremely fitting if you know my family.
We grew up in a 10 acre forest in the middle of nowhere. We were one of the last houses to have the original Nintendo system. Instead of getting us the trendy system, my parents dusted off an old Atari and tried to convince us it was even better than what our friends had. We were always told that "we didn't get cable" which was why our ancient remote-less tv only showed the news and PBS. So, we had to resort to creating our own tv and video-game-less fun which usually involved cardboard boxes in some way or another.
Now that we're adults and can do what we wish, when we wish, we apparently still spend hours making fake game systems just as we did as kids. What's Christmas without turning cardboard boxes into the toys we desire most of all?
My brothers included a check for an actual wii so that when we're actually able to find one in a store we can buy one. Still, opening the fake wee on Christmas was far more exciting than if it had been a real one. And I imagine they had a lot more fun making the wee than if they'd spent hours standing in line fighting for a real one.
A few weeks ago a mother of one of my former students stopped me in the hallway and said, "You have no idea the influence you had on my son!" I start patting myself on the back for his reading or math skills. But then she started to sound more like my own mother, "If I want to throw out a box I have to sneak it past him! He uses every box in the house to make some toy. He's even making cardboard versions of what he wants for Christmas in case he doesn't get it."
When I was a classroom teacher I had a "creation station" where I would keep old cardboard boxes. When children had time they could use the boxes to make houses, cars, and beds for stuffed animals, etc. This was obviously inspired from my own childhood memories, and I was thrilled when this mom reported this little one had carried on the tradition despite game systems and tv being readily available. Maybe when he's 21 he'll spend hours changing a cardboard box into the latest hard-t0-find game system.
Now that I'm older I realize how lucky I was to have parents who didn't give into the latest trends, or how easy it would have been to keep us busy with the tv. Thanks for putting up with all our cardboard creations!
Posted by organized chaos at 2:51 PM

I recently had a really vague recollection of a "bobsledding" game you talked your little brothers into playing which pretty much consisted of putting ourselves in a cardboard box and tumbling down a perfectly non-wintered hill.

(And L.O.-T.V., which was equally absurdist, albeit considerably more high tech)