When we were planning our itinerary for our South Dakota adventures I had chosen the Wind Cave merely because it was close by Mount Rushmore and the Badlands and because it was in my “Secrets of National Parks” book. It sounded like a good opportunity - an underground cave underneath the earth and opportunities to roam the prairie and mountains above the cave. Not to mention chances to stop and watch the prairie dogs do their thing. 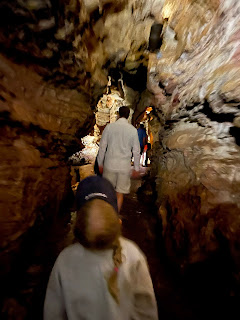 Although nothing compares to the Badlands themselves, the Wind Caves are a great park. We took the hour long tour of inside the caverns and marveled at the creation of the cave. Being from Virginia we have gone into numerous caves as a family, but none with such intricate boxwork markings along the walls. The 54 degrees under the earth was a relief from what we felt above us and the ranger seemed to have the perfect balance of giving adults interesting facts and information while also keeping the children amused. To be fair, our children were participating in the Bingo Board at this point, so part of our enjoyment may have been our children’s lovely behavior. It is always a relief when it is not YOUR child who is fighting over who gets to push the button.

We came out of the cave, ate our packed lunches at a table in the shade, and gave the girls time to finish up their junior ranger books. Reading the room, we decided to not repeat our eventful hike of the day before and instead drive to Hot Springs, South Dakota to see the Mammoth Museum before driving back through the Wind Cave to complete the parents’ desired hike. What can I say? We do learn from our mistakes. 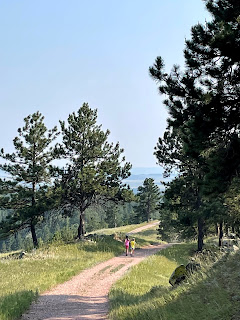 Although at each stop we had a child refuse to get out of the car (we had forgotten to put refusal to leave the car on the bingo board so this did not count against them) but once we cajoled the child out everyone had fun. One of our girls is a mountain goat in human clothing and there were a few times we had to pull her off the rocks while her sister panicked that we were going to make good on our threat of just leaving the mountain goat in her natural habitat. Still, trying to get a child off a hike is better than trying to force a child to do a hike. At the end of the day, on our last hike at .... Ridge, the highest point in the Wind Cave, we took in the view and then watched our girls skip down the trail together as though they were at Disney.
Posted by organized chaos at 2:26 PM

Email ThisBlogThis!Share to TwitterShare to FacebookShare to Pinterest
Labels: good-enough parent, parenting in the parks