Parenting in the Parks #2 - Bingo!

We left off with our last post with our family in dire survival mode at Mount Rushmore, wondering how we were going to survive even one more day at a national park... 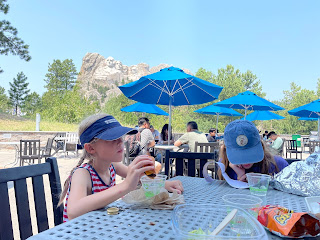 A bingo board where we could actually check off a box for each whine.

Just listening to the whining could actually mean we were winning. Or something like that. As I listened to all the other whining children calling to their parents throughout the park I loved the idea even more. Perhaps because it became clear to me that our children’s whines didn’t necessarily mean we were bad parents (at least, if we were, we were bad parents along with every other parenting marching their child through the monument), but instead it was that we were doing our as parents and they were doing their job as kids. But that didn’t mean we couldn’t make this excruciating experience fun. 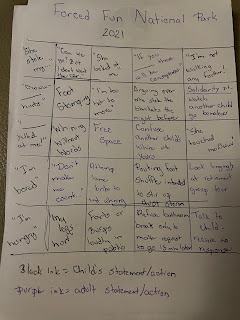 That night we sat together as a family and designed a “Forced Fun National Park Adventure 2021” bingo board. Inside each box we put in a common child whine or action or a frequent parent phrase/action. If we got bingo then my husband and I could choose the dinner location and enjoy large adult beverages. If we didn’t get bingo then our children would have won and we wouldn’t stand in their way of achieving their dreams of getting a massive ice cream treat. Everyone contributed and after a few drafts we had our board - complete with “solidarity boxes” for when we observed whining behavior from other kids.

Please dear god of parents, let this work, I thought as I folded it into my bag. Let’s be honest, a large adult drink would only mean I’d have a massive headache the next day, making their whining on our travel day home even worse. If we “won” the bingo board there would be no real winners.

My youngest studied the board as though it held the answers to a college entrance exam. As we drove toward our third national park she announced “So after we’ve checked one box then we can do that behavior over and again, right?” Great. She found a loophole.

We pulled into the Wind Cave National Park only to see a line of disgruntled families wrapping around the visitor’s center and out into the park. My heart sank - not for the line or the possibility that we might not get tickets to tour the cave, but at the possibility of getting bingo within the first ten minutes of waiting in line.

I want to take a moment to honor the creativity and ingenuity of parents waiting in this line. One group was letting their young children build castles out of pinecones. I’ve never seen such a large pile of pinecones but these children were sitting in front of it as though they were at the beach, creating castles Elsa would have been happy with.

For us, the line gave us time to both work on our junior ranger packets and review the bingo board. We reviewed the difference between stating your need and whining. We don’t want you to not tell us if you are hungry or hurt - but it can be done in a regular human being voice. We practiced. And discussed. And analyzed every loophole.

“But if I am really just hurting and whining is the only thing to make it feel better?”

“But what if my sister does look at me when I don’t want her to?”

Yes, whine at all of these, but then we mark off the board.

Luckily the line was very long and we had time to analyze every situation possible. It is a good reminder that sometimes we have to spell out “If your sister is touching you then you just move away and she won’t be touching you anymore” so that screaming “she’s touching me!” isn’t the first solution that comes to mind. Sometimes our fully developed adult brains forget these small things.

So was the bingo board actually just a cruel way to amuse myself and troll my children from my heartless parenting soul? Part of me felt like it was. I mean, normal parents don’t sit down with their kids and say “OK, tell me all the things you are going to whine about tomorrow. Let’s make a list. Oh! And make a list of all the things we might say when you do whine.” Something about that feels wrong.

And yet, by noon we had only checked off three boxes, and one of the boxes was from honestly thinking my child was whining when it turned out to be another parent’s child. Around 1pm there was a bit of a “she touched me and it hurt” moment, but just checking off one box did not ruin the board. The brilliance of the bingo board is that they can actually make a mistake - because, let’s be honest, it was a long, hot, sometimes boring day, and even as adults we were likely to whine now and then. But that doesn’t mean we need to whine all day long. The board allowed my kids to have those honest moments of traveling like a kid - and gave my husband and I something to think about instead of just rolling our eyes. Somehow it no longer felt like a big deal. We could laugh about the “she looked at me and it hurt” moment together as a family, check it off, tease the girls that we might win, and move on.

Ed Tronick found in his Still-Face experience work that “good enough parents” are only actively attuned to our children’s overtures 30% of the time. We miss their cues and have mismatches or ruptures in our relationships with them70% of the time. In fact, as Winnecott wrote, a child needs just a “good enough” parent - one that gives them that safe place to experience stress and unmet needs that the world will inevitably give them. So lets be real. Maybe 70% of our Rushmore experience was met with whining and frustration. But there were those 30% moments. The collective awe we felt as a family as we found a quiet spot to view the monument from. The family mission to find gluten-free food. Working together to finish the junior ranger packets. Spotting a deer grazing off the side of the trail. There were good moments.

At the end of our day visiting the Wind Cave we let our children choose ridiculously unhealthy amounts of sugar in the form of an “ice cream sundae”. They giggled with delight, both at the fact that we were letting them eat all of this otherwise off-limits sugar, and at the idea that they had beaten us at our game. The interactions we had throughout the day of the bingo board, and the collective meaning created of our overall trip - one of frustration, teamwork, and beating the heat (not to mention surviving an overly friendly bison) is what these family trips are all about. Trips to the National Parks are not going to be idealic despite what anyone’s social media page says. But they can be filled with family meaning making and memories, despite all of the whining and complaining that may come about.

Posted by organized chaos at 5:56 AM

Email ThisBlogThis!Share to TwitterShare to FacebookShare to Pinterest
Labels: good-enough parent, parenting in the parks