I quietly listened to the fifth graders explain their thoughts on whether or not someone could really be smart or dumb and held myself back from interrupting. The class was participating in a Socratic seminar, which meant that we, the teachers, needed to leave the discussion up to them and not jump in to encourage them to expand their thinking. This is a difficult task for teachers who a
re specifically trained in how to question and probe students to get them from point A to point B. But when we sat back and listened it was clear the students didn't need us to encourage them to expand their thoughts- they were doing it on their own.

They'd read an article on the brain, one that explained in (fifth-grade) scientific terms how the brain grows and changes with stimulation. The article even discussed research on rats and how their brains reacted to playing with toys verse just being kept in a cage. It was as scientific as one could get in fifth grade, and the students seemed to love it. As they called on one another by last name and started their statements with, "I respectfully disagree with Mr. Jones..." or "I'd like to add on to what Ms. Smith said," they seriously shared their thoughts on whether someone could be smart or dumb, whether animal testing was fair (should all of those rats had toys and not just some of them?), and could your brain get overloaded with too much information. Some of them gave silly responses but all of them stayed on topic and listened to one another. 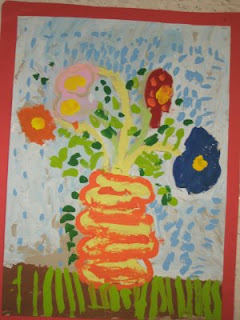 The classroom teacher gave the final question, "Has this article changed your thinking about school?" and I looked around the room with curiosity, not sure what would come out. These students had been inundated with the ideas of Carol Dweck's Mindset since second grade. Every year they've heard about how the brain can grow, and their teachers have constantly talked about it, used visuals, and made goal setting charts for students to track their own progress. Could one article on the brain change how they think?

It did. Student after student shared how the article- the science behind what their teachers had been saying for years- made them believe. They aren't "bad at math" they just haven't worked as hard as they could. Their peers aren't "smarter than they are," they are just working harder.

One girl quietly raised her hand. She barely participated in the seminar, which wasn't unusual for her. We brought the microphone over to her and she began, "My mother always says, 'Go to school. Get good grades,' and I thought, what's the point? I'm not going to get good grades. Why should I go to school? Now I know I can get good grades."

I'm not remembering her quote accurately, but it was more poetic and heartfelt than what I've written here. She's a student who struggles, mainly because she is still learning English. I've worked with her since third grade and can understand where her perceptions of not being someone who gets good grades comes from. It hurt to hear her say that she didn't believe her mother when she told her to go to school and get good grades- but it wasn't a surprise. Her body language every day sent the message that she did not believe school was for her. The article acted like a permission slip for her, telling her that her destiny was in her control- not already set in stone.

Why did the article speak louder than anything we said or did as teachers? Perhaps it is another reminder of how capable our students are. We are adults that talk and talk and talk. When we stand back and let them interact with an article, their thoughts, and listen to their peers they take more ownership of what they are learning. It's not our message- it becomes their own.


Education Week recently published Carol Dweck's latest thoughts on the growth mindset and how the education community has been using it.


Posted by organized chaos at 2:48 AM

Email ThisBlogThis!Share to TwitterShare to FacebookShare to Pinterest
Labels: mindset