Today was a snow day. (Withhold judgement on whether or not it should have been a snow day. There isn't anything we can do to change it, and playing Monday morning quarterback with school cancelation decisions is getting old.)  So I was home with my girls, who are now three and ten months. I'm tired, but that should go without saying.

While the ten month old napped the three year old and I got busy with some art projects I'd seen on Facebook that morning- an entire Buzzfeed list of cool projects you can make with toilet paper rolls.

Here's the first one we tried:

That's the picture from the article. Pretty, right? Little Lipstick declared she wanted to make them. Now, let's take a minute to think about what that would entail to make with a three year old.
Yeah.
Here she is with the glitter glue, making her own version: 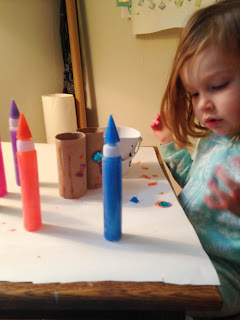 Note the random mounds of glitter on the mainly brown tubes. Yeah. She LOVES them. The neighbors are going to complain that she's spying on them.

Then there were the animals. Oh my goodness the picture of these are so cute. It's no wonder Little Lipstick wanted to make them.

Here's what we made: 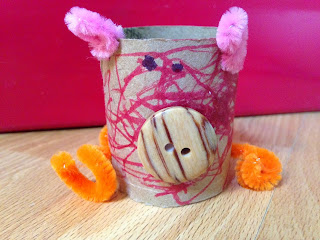 Her pig. She wanted orange legs. And four eyes. I took the picture before she put on the other eyes. 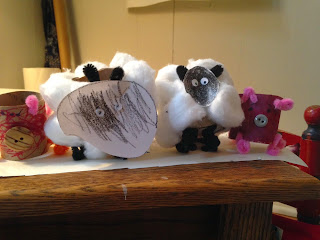 My creations are on the right, hers on the left. She made the BIG face for her sheep and colored in it herself, I did the cutting. She is so proud of her big faced sheep. Let's be honest- I am too.

There was a minute early on when we sat down with the glitter pens when I thought the binoculars could still be pretty. As I watched her throw down glitter with wreckless abandon I realized I needed to quickly make a few decisions-
1) Was I doing these crafts for her or me?
2) What did I want her to get out of this activity? After the art work is thrown away what will my daughter take from the hour of art we have on this snowy morning?

The answers, I realized were:
1) For her, obviously. Although that's easy to say, but not as easy to follow through on. Am I thinking of the facebook or blog post I'll share about her work? It would be easy to forget that I'm doing the craft for her- not for me to share on Facebook, silently bragging about what an awesome mommy I am. (We'll ignore the fact that I'm writing about it now, OK?)
2) The objective is to learn to have an idea of a project you want to create and then to follow through with it. The objective of these art activities is not to create the perfect farm animals, or pinterest-worthy binoculars. It was for her to feel proud of herself for doing a craft, to feel capable of doing a craft, and to know that you can set a goal and follow steps to meet it. Oh yeah, and have fun. That too.

So, in the words of the all-knowing Elsa, I let it go. Tonight as we were saying our prayers she said, "I had a fun day, Mommy. I love you."

Posted by organized chaos at 7:30 AM