Delights of a Children Museum

Over break my family and I went to the Pittsburgh Children's Museum. My poor husband had to drag both me and my toddler screaming from the building when it was time to go. After spending hours there we still hadn't seen or done everything there was to do. We live about four hours away from Pittsburgh and I'm already plotting a trip back just for the museum. Every exhibit was differentiated for different ages so that my three year old could find a way to make each one meaningful to her, while working beside a ten year old who was also having a meaningful experience. Well designed, open-ended, differentiated experiences, just the way we hope our schools could be.

The first room we went to was the work shop, which devoted a large table to a recycling craft center. Bins filled with cardboard boxes, toilet paper rolls, and paper begged for children to come use their imagination to create something from what would otherwise be trash. Scissors, string and an array of different colored masking tape were set out so that they'd be at the young creators' finger tips. To me, the open ended creativity this encouraged was the most valuable from this workshop. The exhibit (if you could call it that) was inviting enough to make you want to sit down and get to work on a creation- any creation- without giving you a sense of one right way to complete the task, or an expectation to do something perfectly. Kids leaving the building were proudly carrying cardboard constructions of- well, I have no idea, but I'm sure they could have told me in great detail if I asked.

The whole exhibit reminded me a lot of my own childhood, to be honest. My mother encouraged us to do the same sort of open-ended creations. Shoe boxes became doll houses, pieces of cardboard because board games, car race tracks, and boats. As a child I remember being extremely excited whenever anyone in my family got new shoes, because it meant I got the box. I would be filled with angry disappointment if we bought shoes at a place like TJ Max that gave you shoes without the box. How dare they? Don't they know all of the possibilities just waiting inside that cardboard? I had an entire doll house made out of nothing but reclaimed recycling. It had three wings and every time I got another shoe box the family got another room for their house.

The museum reminded me of that childhood wonder, and the amount of time I spent tinkering with open ended creative projects. I went home and dedicated a plastic storage box to my daughter's own creations. I'm slowly filling it with empty toilet paper rolls, the more interesting boxes from Christmas presents, and other various items otherwise headed for the trash. She's only three but she already loves running to it to work on her art. 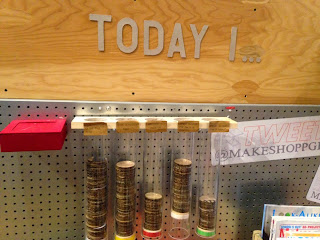 On the wall of the workshop was a hands-onpolling system. Sadly my picture didn't come out very well so you can't see what the labels on the tubes, but they say things like, "Tried something new", "Did something I didn't think I could do", "Got better at something I did before." I love this. I love everything about this poll. It's tangible, it's easy to understand, and it so quickly and easily promotes a growth mindset. If I had my own classroom I would want to implement something like this so that the children could easily drop their cardboard tokens into the tubes. The class discussions it would foster- from "what did you do new today?" to "Which tube has the most? The least? Why do you think that is?" could be so rich. 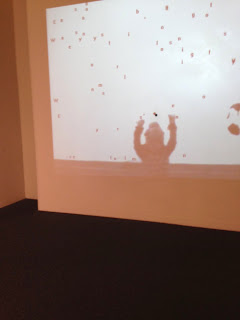 There is so much more I could say about the museum and the experience. The wall where you could catch letters- how much do I want that technology in the classroom so I could turn letters into high frequency words? Every aspect of the museum promoted hands on critical thinking geared to multiple ages. In short, it was exactly my perfect image of a school would be- if we had enough flexible thinking to allow for so many open ended tasks.
Posted by organized chaos at 3:24 AM

Years ago we went to a science museum in Pittsburgh that had the same effect on our whole family. We were there from opening to closing. And all 4 of us, both parents and kids (probably early and mid elementary age) had a wonderful time and didn't want to leave.
It was also a wonderful feeling that we had stopped there because, when asked what the kids wanted to do for fun on vacation, they said go to a science museum.

Too bad flexible thinking and creativeness has gone by the way side. That museum sounds like what classrooms should be