One of the silly things I miss about my old school was my amazing room and my house keeping corner. I had one of those nice wooden kitchen sets complete with an oven, sink and refrigerator. I had it in a corner where I had a fake window. Over the sink I'd stuck a clock and a calendar. I LO 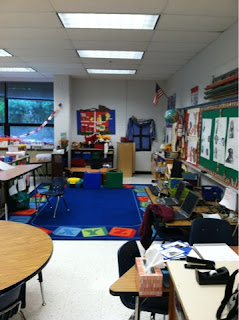 VED my house keeping center. I found it to be such a great teaching tool- we had so many opportunities to practice spontaneous language over there, as well as chances to teach children how to play appropriately and interact with one another. I had a stack of envelopes and cards there as well so that the students could write notes and letters to one another, or take orders if they were playing restaurant. I had a cash register so we could practice counting money while we were playing. Lots of opportunities for language. 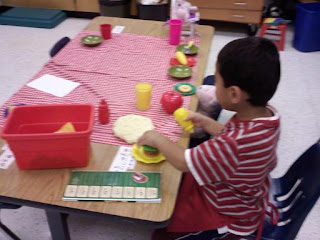 Every kindergarten class at my old school had a kitchen center, so I didn't think anything of it. Last year I mainly had kindergarten students, along with two first graders.

I'd frequently thought about all the great things we could do this year if we had a toy kitchen, but hadn't done anything to actively get one. I was surprised to walk into the kindergarten classrooms at my new school and not see toy kitchen centers. It seemed like such an integral part of our kindergarten rooms at the think tank.

Last week an instructional aide for another classroom popped into my room to ask me if I wanted a toy kitchen. The after school care had found an old one they didn't want and immediately thought of me.

"YES!" I exclaimed, without thinking. I was ridiculously excited by this development. Finally, we'd get down to our important play-business in our room.

One of my colleagues, who has been teaching students with intellectual disabilities for years, happened by my room later that day. I have the utmost respect for this teacher, and truly listen to everything she says. She expressed great concern for me taking the play kitchen. "This isn't preschool, this is kindergarten. Our kids need to be exposed to age appropriate toys and games. If the general education kids aren't playing with it in school then our kids shouldn't be playing with it in school."

I was stunned, but I could understand what she was saying. What does it look like to have my second grade students walk into a classroom where there is a toy kitchen? What message does that send to the rest of the school?

The thing is, I firmly believe that general education classes should have more time for creative play. I would have LOVED to have a toy kitchen in my gen ed first grade classroom. There are so many ways to use it for academics. Just because it's play doesn't mean we can't use it for learning.

I thought long and hard about whether I was going to keep the kitchen. I don't want to make my children any more different than they already are, but I also want to give them opportunities for growth. The kitchen allows for organic language opportunities. It teaches them to have interactive play, something they aren't going to learn without adult assistance. We can put math and literacy into the center. It will never just be "playing". If asked I can always explain what the kids are doing and how it supports their goals.

The first day I let three of my students go to the kitchen center I sat back to take notes on the language they were using. Without an adult prompting them they were having back and forth conversations- they were playing- using the toy food and pretending to eat. These little things are HUGE for my kids. I honestly had never heard this group of children communicate with one another like that.

I just can't put aside my beliefs on the importance of play. I'm sure there are higher-ups in the county who may come down on me when they realize what we're doing. But until then I'm going to keep using the kitchen center to enrich our free-choice time. We're going to keep using it to practice talking to one another, using appropriate social skills, stretching out the sounds in our words while we take one another's orders, counting food we're putting onto plates, and following photo recipes we've previously cooked.
Posted by organized chaos at 3:00 AM

The question isn't why you have the kitchen. The question is why the kindergarten classes don't!This post makes me want to cry! There can be little right in a classroom for young children where play is not seen as a vital part of learning, and make-believe and imagination are not viewed as equally important as decoding and calculating. One of my favorite kindergarten teachers calls the time her kids spend playing with blocks, the kitchen and all the other "playthings" in her room "Home and Careers" . Maybe that would impress the higher ups in your school.

All of the kindergarten classes should have a kitchen area (and a block area). The teacher that criticized you needs a refresher in child development.

jwg is right. All of the kindergarten classes should have kitchen areas (and block areas).The teacher that criticized you needs a refresher in child development and learning.

I think you were absolutely right to keep the kitchen! The language and social development kids get from that play is so worth it.

Well, you know how I feel about play. Play Therpay is what I love and stive to do. There should be WAY more play in school. Recess should include organized playing of kickball and other games along with free play time. Classes K- whatver should have creative play toys. Children learn through play. There is never enough in our crazy academic, testing, assessment focused classrooms. Keep the kitchen and ADD A DOLLHOUSE!

Kids used to do their hands-on, experiential learning at home. Now, many of them are in front of a screen (TV or video) rather than going outside or helping fix dinner. So it's a good thing to keep the kitchens in Kindergarten or, for your kids who need guided play, as far up into the grades as you feel they still need that guided play.

Have to echo everything the above posters have said. Play is thing.

I definitely hid play in my 2nd grade-- "snack break" on the schedule in reality meant you could go play. I didn't have a kitchen, but a few bowls, spoons, dishes and cloths on the shelf didn't stop kids from playing these games.

I also always made sure to include restaurant play within math lessons. (My other favorite was to play "Bank"-- either writing withdrawl slips and handing each other pretend money or writing pretend checks to teach writing numbers in word form.

Your fellow teachers should be modeling their classrooms on yours, not the other way around

I have blocks in my classroom as a creative outlet for when kids finish their work. Every grade of students loves to build with them. I wonder if that would be verboten as well.
Creative play is something I do as an adult artist and I don't deny my students that opportunity for exploration and growth.

I'm glad you kept the kitchen.

I wanted to cry, reading this. It's amazing how we look at imagination as non-academic. What has made America a power-house of innovation? IMAGINATION! You might want to begin using a real kitchen and helping students create foods that they all can enjoy. After all, play kitchens are precursors for real kitchens. I know there are oodles of allergies and sensitivities, but kids need to learn to prepare wholesome food.

The social interaction is wonderful. That alone is worth the play kitchen.