On Friday afternoon, my daughter burst into tears as she watched us strike the set and turn the small stage back into our basement playroom. "But I want drama club to keep going!" she expressed through her tears. It's hard to be five and experience something fun ending. 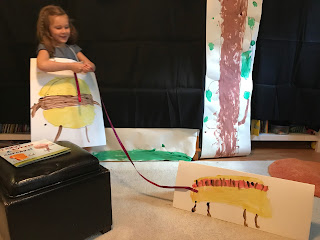 But truthfully, I felt the same way. For the last two weeks I've hosted a drama club in my basement. It was just an hour a day, for two weeks, and was for a small group of early elementary school children. I designed it as a way to support children with their reading over the summer, but quickly realized just what a great opportunity it was to teach social skills as well.

I've always been a big fan of using readers' theater to support readers. In my last year as a full-time teacher the reading specialist and I started a drama club for fifth graders during their lunch time, so they could work on their reading and fluency. We were surprised by the amount of kids who joined the group. We never opened it to all of fifth grade, but kids heard about it and started showing up. Putting on shows is fun, and gives reading a purpose.

Reading scripts is a natural way to work on fluency. Kids are not always willing to re-read a passage with expression, especially if they struggled through it the first time. But when you give re-reading a purpose - like say, needing to read it like an actor would, well then, the motivation changes. Re-reading familiar text is essential when children are learning to read, and repeatedly practicing a play lets kids do this in a way that doesn't create boredom or monotony.

When you involve kids in the planning of the play itself, you are working on their retelling and comprehension skills as well. An actor has to understand a character's emotions before he can take on the part, and so just encouraging the readers to think about how their character feels is a way to foster deeper thinking about the text.

What's more, in order to block out the scenes, you must be able to sequence the events in order, know which character comes first, next, then, and last, and consider what a character's costume may look like. You even have to spend time thinking about the setting so that you can create the scenery. All in all, you can't put on a play if you aren't comprehending the story.

Then we get to the social skills aspect of drama club. Improv is an excellent way to work on social skills. Any improv game requires its participants to watch one another's body language, and flexibly respond to the stimulation at hand. We played games where we could only communicate with each other by using our eyes (forcing us to make eye contact), or where we needed to guess what someone was doing based off of their actions and emotions (forcing us to attend to body language). We spent a long time discussing different types of emotions, because you need to be able to identify and understand emotions in order to act them out.

What I realized during this club is that the mere act of being in a play requires a fair amount of social skills. We came up with a list of "what actors do", that included reading with fluency and expression, changing their voice to match their emotions, waiting their turn to speak, staying near the other actors and not walking away, and listening to the other actors speak so they know when it is their turn. It might just be me, but these aren't just skills actors need... 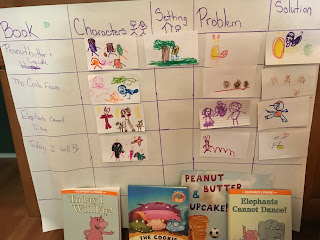 On our first session we identified our goal (to put on a great play) and used the Goal, Why, Plan, Do, Check method from the Unstuck and On Target curriculum to create a plan to stick to over the following two weeks. We referred back to this plan daily, and always stayed focused on our goal (we can't put on a great play if we're talking while someone else is practicing).

We spent the first week selecting a play, and we read many different scripts I'd adopted from different children's books. This required the group to read new texts, and then re-read them in order to decide what they liked better. Before we voted, we created a chart of the different books so we could compare the problem and solution in each text (another essential retelling skill). Finally, the group voted on the book Peanut Butter and Cupcake. 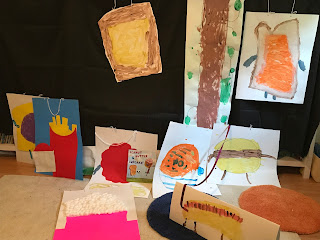 We spent the second week practicing our lines, painting costumes and scenery, and blocking out the play, and ended with a performance for our parents on Friday.

Like my daughter, I found myself disappointed that it was over on Friday afternoon. The ten sessions gave so many opportunities for reading and social skills practice, and I want to keep working with the great group of kids.
Posted by organized chaos at 10:38 AM

Email ThisBlogThis!Share to TwitterShare to FacebookShare to Pinterest
Labels: play, reading-the most important thing in the world