The Great Glue Shortage of 2017

Around the end of February I kept trying to buy white school glue, and it kept being sold out. At the first few stores I didn't think anything of it - maybe stores just don't stock it this time of year - but after awhile something definitely seemed up. How could it possibly not be in stock anywhere?
I knew something was up when I asked someone at CVS and he just shook his head. "The schools all have a big project right now" he said, "I can't keep it in stock. I'll put in an order for extra this week, just make sure you get here on Friday when the truck comes"

I started to get suspicious. There are a lot of schools near this CVS and I know they don't all assign the same exact project, AND I know that we don't actually use that much glue that ALL of the stores in our area would be sold out.

I didn't want to wait a full week so I went to Amazon. Even there, the prices seemed unreasonably high and those sellers were all out of stock. None of them could give me two day shipping.

I mentioned my frustration to a friend who said, "Oh yeah, it's the Great Glue Crisis of 2017. Didn't you hear?"

She hadn't heard any more than that, but she swore she'd heard this on the radio. Seriously? Did something happen in the glue factories that caused a shortage? (My husband made jokes about problems with the supply of horses at this point.)

Google gave me the answer. Turns out there is a glue shortage, and it's for the exact reason I wanted the glue.

Well, kind of. In the Unstuck and On Target Curriculum, one lesson directs you to make Silly Putty using glue and Borax. Silly Putty was discovered by accident when a scientist was trying to find a substitute for rubber, and so it's a great example of how to demonstrate flexible thinking. Even better, in the end of the project you have something to play with that is actually flexible. I'm doing the curriculum with some students, and I really wanted to make the Silly Putty. But apparently, so does every other kid in the area thanks to some YouTube trend of making slime right now. 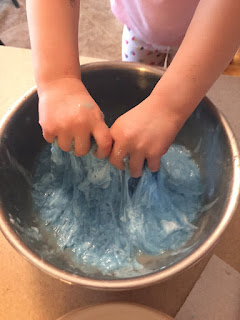 Great. I'm caught up in a hot trend among 10 year olds. I just want my glue.

When I finally bought it, I grabbed 6 bottles. The man at the counter asked me why on earth I'd need six bottles of school glue and I stammered to give an answer. "Ummmm....  so, I really want to make slime... but not because it's popular. I wanted to do it before I knew it was popular. Really. I swear." He raised his eyebrows, obviously having no idea what I was talking about. Doesn't matter. Now I have my glue, and I can start creating my slime/silly putty/whatever you want to call it.

After making it with my daughters I turned it into a guided reading book with instructions on how to make it. Now it's a tool to teach how to be flexible AND gives us an opportunity for reading. Then we'll just write about it afterwards, and throw in some math practice with fractions and measurements and we've got a whole Slime mini-unit.

Posted by organized chaos at 3:02 AM