I was elated when I stumbled upon color changing markers at the Dollar Tree last week. I've heard about people using the markers for behavior plans before, but I'd never purchased a set of markers myself. They are almost $7 on Amazon, and while that's not expensive, it's throwing away $7 if your student doesn't respond well to them. But finding them for a dollar? Totally another story.

Simple concept, right? You color with one marker, and then over it you use the magical white marker. The white marker immediately turns your original color into another color. OK, that's fun, but not life changing. 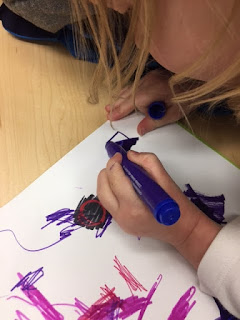 Here's where it gets fun. Instead of coloring with the solid color first, write on the paper with the white marker. You shouldn't be able to where you wrote. Then color over that spot with a colored marker. Magic. Pure magic. You think you are coloring with red, but *boom* a secret message is revealed in blue.

My two year old and I played with these for almost 45 straight minutes while her older sister was in a sports class. I'd use the white "magic" marker to write a mystery letter, and then she'd color over the spot to reveal the secret letter. It's marker peek-a-boo and highly engaging.

Think of the possibilities. Write the answers to a math worksheet in the invisible marker. Once the child has solved the problem he can color over the clear spot to reveal the answer and check to see if he is correct. Word wall words can be so fun to uncover and read. Letters, numbers - any rote skill that you're trying to make more engaging can be enhanced by letting your student make it magically appear on the paper simply by coloring over a white space.

Now, where these markers are really magical is with behavior plans.
Take your normal "You need to get 5 stickers and then you earn a break" behavior plan. Instead of stickers, let the student color in a box. Before the day starts, you can pre-set the plan by coloring in a few boxes with the clear color-changing marker. At some point, when your student goes to color in his block, he will magically reveal your hidden coloring. How much more exciting does that make the behavior plan? This is perfect for kids who easily get bored with your current plans. It's much more motivating to participate when you never know when you'll uncover your magic space. You can think of something fun for your student to do on the magic space - whether it means a class dance party, or a special high-five, add in an extra twist to make it that much more fun.

This also means you can play Behavior Bingo - every day your student can start with a blank bingo board (where you've already used the color-changing marker to color in 4 or 5 blocks in a row). When your student is caught being good, or has earned his token, he can color in one block on the bingo board. He's trying to make Bingo by uncovering your secret message.

Even more fun - play Behavior Battleship. Same idea as bingo, but instead of a bingo board where your student is only trying to find 4 spaces in a row, hide 4 battleships on the board and have your student earn chances to color in a square to try to find the ships.

I haven't found them at every Dollar Tree I've been too, so they don't all carry them. But if you find them, they are worth grabbing a few boxes and adding them to your creativity teaching tool box. Sometimes it's the little things that engage our kids the most.
Posted by organized chaos at 11:10 AM