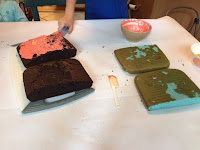 One of my projects this fall has been to help homeschool my cousin's son. They are a military family and are headed overseas in a few months. Rather than start and stop another new school this fall we decided to try homeschooling.

So when when were studying about the ocean floor and he jokingly said "We could make a model of this out of brownies and cake" there was no reason not to say sure, let's try it. 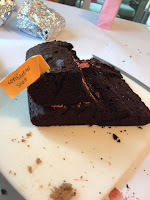 The worst thing that could happen would be that the project was a total disaster, but from a learning perspective, even if it looked frightening or never turned into an actual cake, he would still have to know the elements of the ocean floor in order to create a disastrous looking cake. We'd learn something in the process. So why not? It's oddly freeing to not have any time restrictions when planning a project. Of course, in this case we did need to worry about the over excited younger children (both my daughters and his brother) who were obviously fascinated and a bit horrified that we were absolutely destroying a cake like this. My two year old kept telling us "No! You don't cut cake like that! NO!" 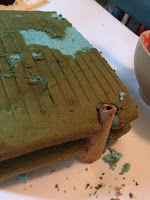 He drew out a model of what we were going to do, and then I baked two sheet cakes. One chocolate and one white with blue flood coloring. (I did not use enough blue food coloring though so the final outcome was a bit greenish. But that's more appropriate for ocean water anyway, right?) 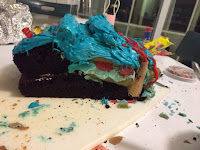 Then he spent time figuring out how we were going to put the cakes together to reflect the ocean floor and water. In the end we cut the cakes in half so we had four blocks to work with. The bottom two layers of chocolate were the ocean floor, and then he cut into them to create the Continental shelf, slope, rise, and abysmal plain. From there he had to figure out how to make the blue cake fit onto the chocolate cake like a puzzle piece. 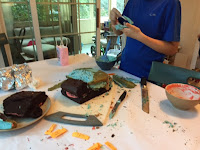 Part of his plan was to use an upside down ice cream cone to reflect an underwater volcano and fit it into the cake.

As we worked he also decided the cake needed waves on top, so we used some of the scraps of blue cake to put "waves" up above. 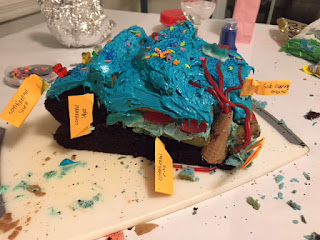 The end result was a fantastic cake that required not only a knowledge of the ocean floor but a large amount of vision, problem solving skills, and perseverance at set backs to create. Oh, and it was delicious. So there is that too. 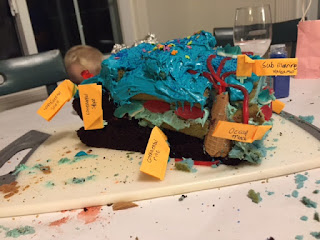 Posted by organized chaos at 4:25 AM