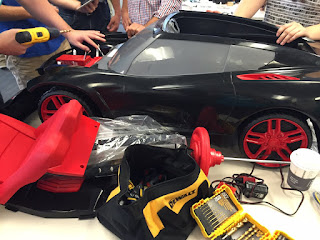 On Saturday I had the privilege of spending the day at Marymount University, watching teams of volunteers put together cars for kids with disabilities. The day was like nothing else I've ever experienced before. 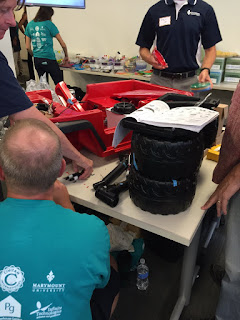 Just on the surface, this is an incredible initiative. Take those battery powered cars kids ride around in, adapt them so they can be operated by a simple push button, and then figure out how to best adapt the car so that a child with disabilities can safely sit in it and operate it independently.

By giving a child with a physical disability a motorized car, the team is giving them the independence to move themselves around without relying on someone else. For many of the kids this is the first time they have the power to run away from their parents. Suddenly their world is going to look different as they realize that they can move, and turn, and manipulate their environment through their motor planning. And unlike when they are in a motorized wheelchair, the cars are just cool. If you take one of these cars to the neighborhood bike-ride, the kid is immediately going to attract some peers, not because he is different, but because he has something other kids can relate to, or even want. A very cool car.

One of the participant's older four year old brother leaned over to me as he watched his brother's first solo drive and said, "Oh man, now my brother's car is so much cooler than mine." Yeah. Pretty much. I bet that doesn't happen very often.

Watching kids begin to realize that through the push of a button they could zip around the halls of Marymount choked all of us up. The children's unsure expressions quickly changed to smiles as they got farther away from their parents. Others were able to drive around their siblings in a two-seater jeep. I am sure the typical pattern in their households is for them to be depending on their siblings for access to toys, food, or play. The change in play-power brought many big smiles, both to the drivers of the cars, and their sibling passengers.

Beyond just how amazing this was on the surface, I was fascinated by the process. There is a lot we could learn from how the day went down. This is creativity and teamwork at its best.

The morning started in a room full of cars, where volunteer teams were given a car, a tool kit, an iPad with instructions, and told to go at it. After the car was able to be drive through simply pushing the button, a team of physical therapists joined each car and started looking at the child's physical needs to determine how to fit the car to the child.

From there, the creativity started. Everyone had one task to achieve, and they could use any available material to make it happen. One wall of the "garage" was lined with a variety of PVC pipe, harnesses, pool noodles, foam, foam kick boards, decorations, and different seating options. 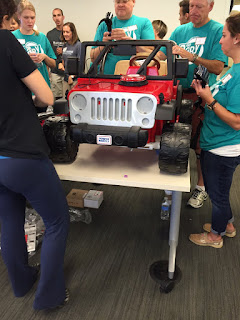 Every team had the task of looking at the child's needs and then using what was in the room, in any way possible, to make the car work for the kid. There was no choice but to problem solve until it was perfect. The car had to work for the child, no matter what. People stood over the cars, brainstorming, trying different things, re-purposing anything around, stripping down seats, cutting PVC pipe, trashing ideas that didn't work, and trying again.

There could not be any ego on any team so there just wasn't. It was not an option. There wasn't a "this is the best we could do so now we're going home." This wasn't about pleasing a boss or winning a contest. It was about the simple goal of safely making a child mobile.

Every car ended up being drastically different. I wish I'd had the opportunity to take pictures of each car, but I am sure the various news crews that were there captured them. The big buttons were placed anywhere in the car the child needed it to be placed, whether that was up at the child's head or by the child's hands. PVC pipe and pool noodles created structures to help a child sit safely in the car, and kick boards went behind seats to provide back support.

The event took over the entire second floor of Marymount's Arlington campus, and included a playroom for kids to hang out, a room with therapy dogs, quiet, calm rooms where kids could go to get away from the noise, food, and of course the "garage" where the magic was happening.

I hope that today, the day after, there are twelve happy kids spending the afternoon zipping around their driveways, exploring what freedom and play can feel like. I hope there are shared laughs, children driving a little too fast, sibling fights over who gets to use the car, and just pure exhaustion from the new activities. 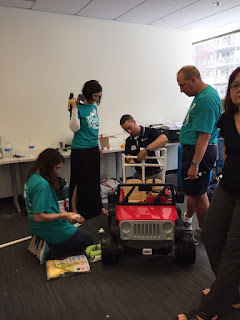 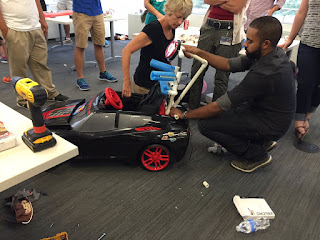 Posted by organized chaos at 12:07 PM

We at GBG had a blast -- thanks for the wonderful summary and pics!
Best, cole and gang