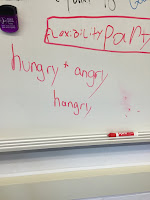 On Tuesdays I meet with a small group of fifth graders to follow the Unstuck and On Target curriculum, which addresses executive functioning skills such as using coping skills, creating plans around set goals, and dealing with the unexpected.

When I do this group with younger grades the coping strategies usually center around taking deep breathes or going to get a drink of water. The much younger grades can even refer to Daniel Tiger and Elmo's coping strategies of belly breathing or counting to four before you roar. This group of fifth graders however is more mature and somewhat beyond my typical go-to list.

As I listened to one student talk about how her family responds to her irrationality with food because she often forgets to eat I found myself describing the term 'hangry'. Because, let's be honest, this is a common adult problem. If you are a person who forgets to eat and then gets cranky you should probably be able to identify when you get 'hangry' and be able to fix it yourself. Just as much as you should know to take a deep breath or get water when you are angry in kindergarten. I once worked for a women who often forgot to eat. It was commonly known that you should only approach her 20 minutes or later after meals. Anywhere between 11:00 am and 1:30 pm was a danger zone because most likely she hadn't eaten lunch yet and you would be yelled at. Wait until after she'd eaten? She was lovely.  Hangry is a real thing. We should all be able to recognize it in ourselves, right? It was not a term I expected to be describing to a group of fifth graders, but it seemed appropriate at the time. 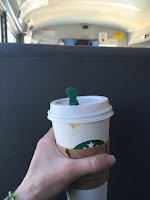 As I wrote it on the board another student looked at me in horror. "Isn't that just comfort eating?" he asked, "Are you now telling us to eat our feelings? We're all going to get fat." The other group members looked at me curiously, as though in their mind I was suddenly the witch in Hansel and Gretel, out there trying to fatten up children.

Cue the talk on our individual differences in our coping strategies and how I am NOT telling them to go home and eat whenever they are angry or frustrated. Listen to your body, know yourself, and no, don't just eat your feelings! But don't forget to eat! Daniel Tiger anyone? The whole stumbling discussion found me wanting my own coping strategy- Starbucks.

Posted by organized chaos at 3:14 AM

Love it! one of my children could make it through the school afternoon all sunny and cheerful (according to her teachers) but would walk in the front door pretty much in tears every day. Nothing was said until she had had a bowl of cereal and milk, which put her in good shape again. Your fifth grader was very astute --