(Not) Managing Life While Teaching

There is a hole in my kitchen ceiling. Back in July an overly ambitious plumber put it there trying to find the pipes (in his defense he was our third plummer in our quirky old house and he was absolutely determined to do what the other two couldn't.)  At the time we'd called contractors and handy men and they all said they were too busy with Derecho work to help us out. School started and we quickly realized that we wouldn't have a chance to get it fixed until next July. 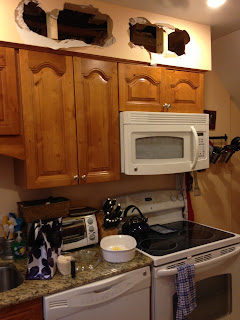 It's not pretty. It's jarring when you walk into the kitchen. People who have been to our house multiple times look at us in confusion and ask nicely if we'd like the name of a good handy man.

It's nearly impossible to get things done when you're a teacher. We don't get to just pop in and out of school for the little things in life. Popping in and out of school means substitutes, lesson plans, leaving lessons un-taught, getting off pace with our planning, and just creating a general break in routine for our students. And in my district you have to get a substitute for a minimum of three hours. If I want to be home to meet with contractors I have to dedicate 3 hours of my precious, precious sick time.

I have a doctors appointment that I keep cancelling. I don't want to tell you the last time I had a physical, but I finally found the time to make an appointment. Then a meeting came up so I postpone the appointment a week. Then another meeting. Then a child is having a rough week and I know I can't take off.
Don't ask me the last time I've been to the dentist. Baby L was prescribed physical therapy. That's on hold until the summer.

Before Baby L it was different because I could risk the occasional doctors appointments and household chore hours. Now I have to save my sick time for being home with a toddler who is exposed to all kinds of germs in daycare.

Occasionally I'll meet someone who went into teaching because it gave them the same schedule as their kids. This confuses me. I know other professions make it difficult to take off from work as well (I mean, Mr. Lipstick is equally responsible for the hole-in-the-kitchen phenomena) but he manages to get to the doctor. He can leave work for an hour or so. It's not easy on anyone, but it is possible. Teaching is that strict set schedule that doesn't allow you to be flexible for life. As a carefree 20 something when you don't have to be flexible this isn't too bad. As a parent it is ridiculously hard. I know so many moms missing their "muffins for mom" breakfasts just to host their own.

At some point I'll fix the hole in our kitchen (and yes, I'd love the name of your contractor/handy man/ neighbor who wants to get into the business).

Posted by organized chaos at 4:30 AM

I schedule every thing during breaks/holidays and we have dentists who do 7am appointments. It also helps that we live less than 5 minutes from the school I work in... no commute means more time.

I read this post at 7 pm after getting home from making sub plans. I'm having minor surgery and taking 4 days off--which means spending 8 hours of my time making plans that are educationally worthwhile but aren't the meat of my teaching (because while I know my sub is a competent teacher, I trust no one else to teach the stuff that's REALLY important.)I am crossing my fingers that my sub will show up, that my kids will behave, and that I won't have to spend 3 days reteaching my rules when I return (on crutches...in May...what was I thinking?...) In my next life I want a job where, if I need some time off I just ask my secretary to hold my calls...