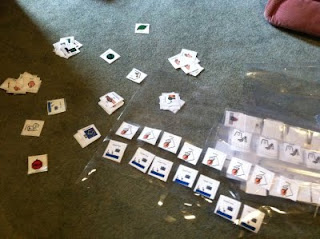 I have spent the day in laminating hell.
If you teach special ed you are probably familiar with Board Maker, which is fabulous in many, many ways. It lets you create all sorts of picture icons for your students- all you  need to do is type in the word you want to say and it gives you a simple picture that corresponds with that word. It is great for creating reminder cards for the rules, making schedules for students, and creating individual behavior plans. It gives you lots of possibilities- however, many of these involve a lot of painful, tedious prep.
Last spring I observed a special ed teacher in a self-contained classroom who had individual schedules for each child. As the children moved through their day they took the laminated board maker icon off their schedule and placed it where they were moving to in the room. So if it was time for morning meeting there was a morning meeting icon on their schedule. When they went to morning meeting they took off the morning meeting picture and placed it on a board in the meeting area. I'd also seen this done in other special education classes and every teacher I knew that used it said it made it huge difference for their children. I decided it was exactly what I needed to do next year.
I just wasn't thinking about all the prep. Creating the icons in board maker was no big deal, then printing and cutting them out still wasn't so bad (I used a paper cutter, they are not perfectly cut, but since we're talking about 20+ pictures per child, for 10 children, I'm not worrying about perfection). Then I had to stand over the hot laminator feeding those small stupid squares into it. No matter how efficient you are at laminating, trying to feed 200 1 1/2 inch square pieces of paper is not something you can do overly quickly. Then, once everything has finally been laminated, you have to actually cut out each tiny little square.
And the worst part? After everything is cut out I need to go through and cut out 200 pieces of velco and then smack those onto the back of each little square. Have you ever worked with sticky-backed velcro?  Peeling the adhesive off the velco isn't fun after 3 or 4 pieces- 200 is going to take me forever.
If you teach you know what I'm talking about. You're rolling your eyes and thinking, "Don't even complain, it's part of the job."
I actually have moved into the camp of "nothing needs to be laminated". Most things aren't worth the time. But for pieces of paper that will be handled everyday by kindergartners? There is no choice. Or there was, but the choice was to not create these schedules. Trust me, even at halfway through I'm weighing the options of just tossing in the towel on this project. But is it best for the kids? I think about my students' needs and how I've seen this work in other classrooms...  and it's back to cutting.
The picture at the top does not do it justice- my basement is covered in a large roll of laminating sheet along with lots of tiny little pictures. After 2 hours of cutting I'm not even halfway through. And I can't think of a faster way to do it. At least it is a good excuse to watch trashy tv during the day. I'm not wasting away watching junk- I'm WORKING.
A masters degree and one year into my doctorate, and I'm spending my time cutting small squares and peeling paper off sticky-back velcro. I swear I love my job. I really do. There is just something slightly demeaning about having my husband come home dressed professionally from his respectable office job to find me on the floor in the basement, surrounded to laminate and pictures of toilets, going cross-eyed from cutting out small pictures.
"Aren't you suppose to be on summer break?" he asked.
No response. This is summer break.
Posted by organized chaos at 7:01 PM

Email ThisBlogThis!Share to TwitterShare to FacebookShare to Pinterest
Labels: back to school, summer

I homeschool and do this stuff ALOT. I print out the pages with little pics on them, then laminate the sheets as a whole. Finally, I cut 1X after all is laminated. Also, are you using strips of velcro or velcro dots? The dots are about 1000% easier and are sold at walmart and craaft stores. LOVE your blog!!!

You will safe your sanity if next time you laminate the sheets as a whole and then cut them out. You don't need a border of laminate around the edge if it is a single page. If I want a backing sheet then I just glue them before laminating and it still works. It's still a lot of cutting and I commend your efforts. Just watch a doco on destruction of the tiger's habitat to make our paper so I'l think of this next time I'm cutting out thousand of small pieces of paper :)

I understand there is printer ink that will print on plastic. Then you wouldn't have to laminate. And I second the suggestion about the velcro dots.