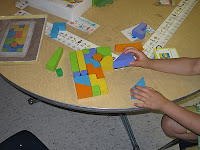 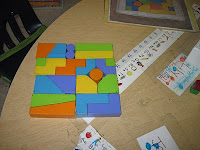 On Friday afternoon I sat down with Fabulous Friend during their free-play time. She'd chosen to play block buddies, which is like a primary version of tanagrams where the student has to put a set of blocks together to match a picture on a card. Fabulous Friend was doing ok, but not necessarily soaring with the task. It was Friday, I was tired, and since I couldn't think of anything else to do I sat down beside her when she asked me if I wanted to play with her. (I love kindergartners take the "good friends ask someone to play" so seriously that they apply it to adults as well).
After watching her work for a few moments I found myself giving her mindless feedback. "Wow, look at you, awesome!" As I heard the words come out of my mouth I regretted them immediately. This was the perfect opportunity to experiment with the meaningful praise CarolDweck discusses in her book, Mindset.
In one of the early chapters in her book she discusses a study she conducted where she gave two groups of students a set of brain-puzzles. One group was praised with "wow, you are so smart!" types of praise, while the other was given " Wow, what a hard worker you are. Look how you turned that piece and considered all the angles..." etc. Then the puzzles were taken away and the two groups were given the option of a new set of puzzles- they could choose a harder set of puzzles, or an easier set of puzzles. The students who were praised for how smart they were chose the easy set of puzzles, while the students praised for their hard work chose the harder set of puzzles.
As I watched Fabulous Friend work I tried to channel my inner-Carol Dweck and give Fabulous Friend specific praise for what she did to build the block picture, as well as praising her hard work and dedication. I shifted from the generic "wow, you are smart praise!" to more meaningful praise, and as I did I could visibly see Fabulous Friend change her method. The more I praised her for her hard work the longer she held each piece, the more she double checked the picture, the more she worked carefully to put each piece in place. It was as though she changed right in front of my eyes. When we began the game, no less than ten minutes before, she was rushing through the puzzles quickly, not attending to where she put each block, and looking around the room as she worked, even when I gave her "you're so smart" praise. Yet as I turned to using "hard worker" praise she continued to grow into it, until she was able to complete a puzzle without my help, and without my prompting her to check that she put a piece on the correct side. She stopped looking around the room and became more engaged in the task.
In a short period of time she changed her work habits for one task. What happens if we continue this feedback throughout her day, praising her for her hard work? What happens when we use this with all children?
It also occurred to me that free-play is such a powerful time to give students this type of praise. It is when they are doing something by choice, which means they are more likely to be engaged and excited about the activity. They are more relaxed, and their brains are more awake & stimulated. Free-play is the perfect opportunity to begin to change our friend's mindsets to make them proud to do hard things.
Posted by organized chaos at 6:50 PM

One term for that is "authentic praise". It's a really hard concept for some of my adult students to grasp. They are obsessed with raising the kids' self esteem and we have many discussions about things like why not every piece of artwork is "so beautiful". It's also a hard thing to try and do this all the time. It's not instinctive and sometimes it's OK to gush, a little.